Hari Kondabolu and I shared a condo in Aspen four Februarys ago. Wait. That sounds weird. Hari Kondabolu is a funny stand-up comedian who's from New York City, but spent time away from the city to develop his comedy skills before coming back. Now look at him. Specifically on Friday, you can look at him when Comedy Central debuts his first half-hour Comedy Central Presents. Let's get to know him better. 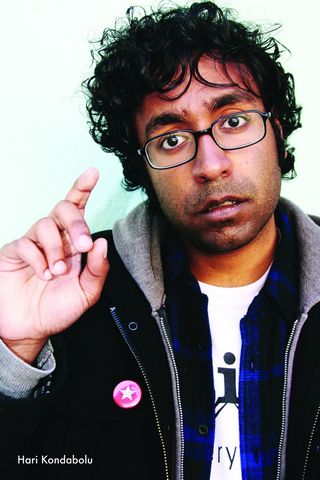 Name: Hari Kondabolu
Arrival date: December 2008
Arrived from: Seattle
When and where did you start performing comedy? I did standup for the first time on January 14, 2000, when I was a 17-year old senior at Townsend Harris High School in Flushing, Queens. I started a comedy night called "Comedy Night" and closed it out with approximately 20-25 minutes of horrible standup comedy. I continued doing horrible comedy during my college years at Bowdoin College and Wesleyan University and during trips back to New York City on breaks from school. I started to perform regularly around October 2005 after I moved to Seattle and discovered a burgeoning alt-scene and a supportive home club in the Comedy Underground. I learned to be funny and hone my skills in Seattle.
What was your best credit before moving here? I performed at the 2007 HBO Comedy Festival in Aspen and Jimmy Kimmel Live (also in 2007) and then Comedy Central's Live at Gotham in 2008.

Why did you pick NYC over LA or anywhere else? I grew up in Queens, so moving to NYC was me finally coming home. My parents and brother are here, so I knew I'd be well-supported. It's not quite the same as someone starting fresh in a new city.

How long did it take to get your first paid gig in NYC after moving here? Don't remember. Maybe a couple of months. It was maybe in the range of $5-$20.

How is this scene better/same/worse than the scene you moved from?There are more performance opportunities each night in New York City, but I was definitely getting more consistent, higher quality stage time in Seattle each week. By "higher quality," I mean shows where I could do longer sets (15 minutes or more) in front of decent-sized audiences who were attentive and supportive. Seattle audiences can be really thoughtful and fairly well-read, which worked to my strengths. Polishing a joke in NYC seems to take a lot longer than it did in Seattle and I so I relish every trip back there. Practically speaking, NYC has industry and Seattle does not, so you're limited from a business standpoint. (Though not creatively.) Also, you can't be lazy if you want to make it in NYC and the talent level here is extremely high, so once you kind of know what you're doing, it speeds your development into a more serious comedian.

What tip would you give to any comedian who moves here? Be patient. There are many comedians, and lots of really good ones, in New York City and you have to earn stagetime. I had 2 TV credits and a major festival appearance before I moved back here and my first year in New York kicked my butt. I was doing 5-minute sets in the back of a tea house in Chinatown trying to figure out what went wrong. The best advice I could give a comedian is to NOT start in NYC. Start in a place where you can get lots of stagetime early, build confidence and develop an act. I learned how to feature and headline in Seattle, as well as how to do a tight 7 minutes. I developed my voice and learned how to perform for different audiences. Obviously, there are amazing comedians who started in NYC, but since stagetime is harder to get, you don't get as many opportunities to do long sets early. You have to be better faster here if you want to move up. The comics I've met from Boston, SF and Chicago definitely seem to have a leg up when they get to NYC. (Boston comics are particularly good with their short game and I think Rick Jenkins and the Comedy Studio has a lot to do with that.)

Additionally, NYC is a hard place to live, especially if you're an artist, so you better have your shit together before you come here. Come with a plan and lots of strong videos of yourself. If you're killing it in your old scene, tape yourself as much as you can. Have something to show people when you move. Build relationships with other comics. Try to avoid starting from the ground up again and if you have to start from the bottom, go up a lot and stay focused. If you're here to do this, there's no use getting discouraged and not performing…even if it's the shittiest spot in the world. You came here to do comedy, so do it whenever and wherever you can.

How did growing up in NYC shape your desire to be in show business?

Well, I definitely understood how comedy worked more than the average comedy fan in other parts of the country since I was surrounded by live comedy. The big spot for me and my friends when we were in high-school and college was the Comedy Cellar. The Cellar had this Internet deal where you could see a show during the week for just 2 drinks. So for the cost of some sodas, we would see Marc Maron, Colin Quinn, Todd Barry, Ted Alexandro, Greg Giraldo and a bunch of other brilliant comedians work out material. I saw how a bit was crafted over time and not just a finished product on television. I saw comedians who were famous taking risks and failing. I felt like I had a better grip on what doing standup entailed more than maybe the kid who only saw a comic live with a polished set when he or she visited their college or town.

However, none of this really fed my desire to be in show business. If anything, New York City made me feel like this impossible.  Doing standup in NYC was horrible when I tried it as a college student on breaks. Since I thought it was ridiculous to bark, pay or bring 40 friends to a club to get stagetime to see me do 7 minutes at a comedy club, I did lots of crappy folk open mics where I generally followed a really amateur poet, some performance art piece or some dude playing "Born to Run." It was ALWAYS "Born to Run."  All the other open mikers didn't care what you had to say because they were so focused on their own derivative 3 minutes.

It was living in Seattle and actually getting to perform in front of people who wanted to see comedy that made me think that I was any good. I learned I was not just good in college and in front of my friends, but in a real city with real people watching. I eventually got discovered by the HBO U.S. Comedy Arts Festival in Aspen when I was living in Seattle and got my first two credits before I moved to NYC and committed to this career, so the choice to pursue an entertainment career seemed less crazy. I got discovered making the art I wanted to make with very little compromise.

Did growing up in NYC make it any easier to launch your comedy career here? My folks let me stay with them in deep Queens the first 2 years when I decided to jump headfirst into standup and that let me focus on writing and performing and not worry about a day job. That, without a doubt, was the biggest advantage. I mean, 90-minute commutes each way for 7 minute spots on a Tuesday were killer…but I didn't have to stress to pay rent like other folks. I'm lucky.

Have you ever considered moving to L.A. or elsewhere to further your career? I'd be happy to stay in NYC, but we'll see where this comedy thing takes me.

Where do you see yourself five years from now? If the earth survives the next five years, I hope I'm still making art I find interesting.

Here's a promo clip Kondabolu put together for this week's CCP, followed by a clip that got cut from the half-hour, in which he describes the power of Vitamin Water. Roll 'em!

2 thoughts on “Meet Me In New York: Hari Kondabolu”