You may be used to seeing Kurt Braunohler onstage or on TV with his comedy partner, Kristen Schaal. You may have even seen Braunohler onstage solo doing stand-up, or with improv groups at The PIT in NYC. Get ready to see him in a brand-new, old-school comedy role: Late-night talk-show host. 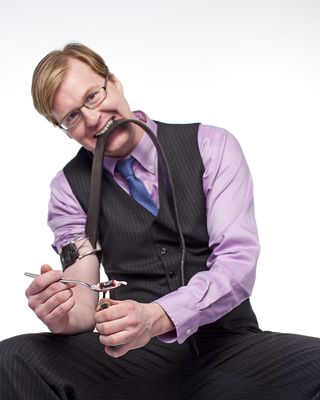 Tonight at The PIT, Braunohler launches his new monthly project: Night of the Living. His first guests will be Eugene Mirman and Jon Glaser, with Adira Amram and the Experience serving as his first house band, and a secret musical guest performance.

What gives, Kurt? "I just really wanted to be onstage more. I wanted to find a show where I could be on the stage the entire time, and found a talk show would be the best way," he told me.

Seriously, though, Braunohler says Night of the Living is about wanting to be more relatable and connect with audiences, and also conduct interviews, "and a talk show is the perfect venue for so many weird things to happen, but in a format that's very recognizable."

That's all well and good, but aren't there already plenty of talk shows, whether on TV or on stages around the city and other cities? "What's going to set it apart from other shows is its sensibility. It's a talk show for us. It's a talk show that we are going to like. The kids. The cool kids. The people who come see Hot Tub (his weekly Monday-night show in Brooklyn) every week. The people who are going out to the backs of bars to see shows. It's not a new brand of comedy. Everything's been done before. It's just got a lot more deer. More animals. Yeah."

Oh, also keep an eye out for his desk. "We have a talking telephone. I have a puppeteer who works for Jim Henson, who put together a telephone that's going to sit on my desk and be my sidekick," he said. It'll also, and I'm not sure on the science behind this, electrocute him whenever it rings. He has no human sidekick yet, but he may in the future.

The show will feature a rotating house band with a NYC-centric base. And Braunohler is looking at lining up acts such as Yo La Tengo and A.C. Newman for guest performances in upcoming months.

"The idea is to put a stupid amount of talent into such a small space," he said.

The PIT's move to its new, larger space helped him decide to make a go of it now. "No that The PIT is in this beautiful, new theater, you can fit 110, 120 people," he said. "And the bar. I want the whole show to feel like a big celebration of New York City and what it's like to go out in New York and party and the weird shit that you'll see."

Speaking of, here's the first promo clip. Roll it!

But even if it sounds weird, Braunohler has high hopes for it all.

"We're approaching this as a real late-night talk show. I've assembled a team of writers. Our head writer is Scotty Landes, who, we've written together for a long time. The whole idea is high-quality super weird comedy with great musical acts and funny guests," he said. "The whole point is to sell it. We want to make it a television show."