Remember when I said that the people who love Saturday Night Live's political cold opens more than anyone else are the people who work in politics? Well, they just put their mouths where their laughs are, picking SNL head writer Seth Meyers to speak at the 2011 White House Correspondents Association Dinner. 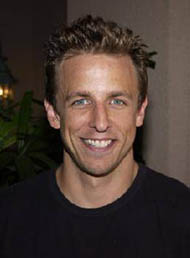 In addition to leading the SNL writing staff and anchoring its "Weekend Update" for the past five seasons, Meyers also recently hosted the ESPY Awards for ESPN this summer.

"We're very excited. Seth is a very smart, very sharp, and very funny observer of the political scene, and we're looking forward to seeing him on April 30," said David Jackson of USA TODAY and president of the WHCA.