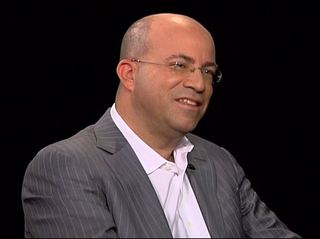 Jeff Zucker sat back down at the table with Charlie Rose last night for his "exit interview" as CEO of NBC Universal.

Rose grilled him for much of the 40 minutes (link to video here), asking him again and again about how he failed with NBC Entertainment, and even though Zucker has described his decisions about Jay Leno and Conan O'Brien with Zucker before, they went through it all again. Why??? That's not me asking. That was Rose.

There's some initial discussion about the transition for Comcast to take over NBC Universal and the future of media, Zucker's start in news as a producer on Today, and then after some talk about the difference between being a news guy vs. an entertainment guy — and whether New York City and Hollywood are on the same page, Rose gets back to Jay vs. Conan. From the transcript:

"So we're off that topic now?" Zucker joked a little while later.

Zucker later acknowledged that knowing Conan for 30 years — going back to their days as fellow Harvard undergrads — makes him regret that their friendship is not what it once was. Zucker also tells Rose that several years ago, he tried to lure Jon Stewart away from Comedy Central and strip his version of The Daily Show five nights a week at 8 p.m. (or even 7 p.m.)!

By the way, when you look away from the screen, a realization hits that Zucker sounds more than a little bit like Bob Costas. Wonder if he has ever done voiceover pretending to be Costas. Conspiracy theory?

How many comedians can you identify in MAD magazine’s new animated spread?

Get your Tenacious D fix with “Senorita” on Conan; special performance with Weird Al