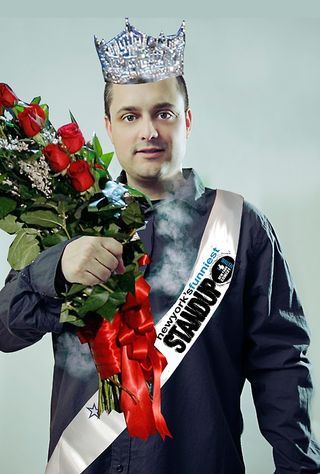 Belated congratulations to Nate Bargatze for winning the 2010 edition of the New York's Funniest Stand-Up competition. The contest finals were held Saturday afternoon at Carolines, but the announcement was only just made official today.

Maybe they needed all that time to Photoshop his photo?

Regardless, congrats to Nate on his victory, for which he receives $500 and a week of gigs at Carolines. He's also attempting a double-win this week, already advancing to the semi-finals in the annual Boston Comedy Festival contest.

If you need to know more about Nate Bargatze, you can read my Meet Me In New York profile of him from last year.

Comedians: Please fill out this survey to help The Actors Fund help you