Late last Monday afternoon, I received an email asking me for a quote for the current week's issue of OK! Magazine. They wanted me to weigh in on the so-called "gay joke" that Vince Vaughn tells in the trailer for Ron Howard's upcoming movie, The Dilemma, which CNN's Anderson Cooper railed against and got removed from the trailer, although not entirely from the film. But the magazine's request for a quote came with a catch: They wanted me to defend the joke. On their "Big Debate" pages, taking the counterpoint stance against GLAAD. Oh, and I had about a half-hour to craft my defense. Good grief! Actually, this is the good kind of grief, isn't it?

On second thought, I wondered if this is how that writer for Marie Claire found herself in a hot mess over a column about "fatties" who grossed her out on Mike & Molly? Maybe she was just following instructions, too? Well, damned if I was getting myself in a pickle just for the sake of some publicity. 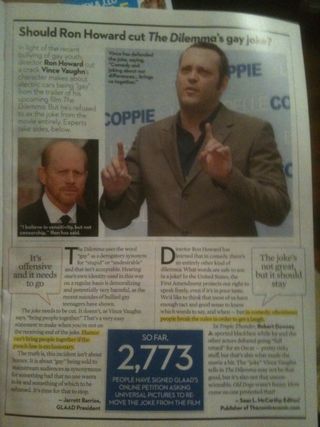 So I watched the original trailer for The Dilemma again. It'd appear that the gay joke isn't even a joke at all, as the comedy that's supposedly derived out of the situation comes from Vince Vaughn's character putting his feet in his mouth as he backpedals from his initial comment that "electric cars are gay." There's nothing funny about that statement, whether you're 9, 39 or 69. And GLAAD makes the very valid point that using "gay" as a substitute for a word that means something bad that nobody would want to be doesn't help the gay children of America who need to know that "it gets better." The same goes for the word "retarded." I wrote about the latter term as a reporter for the Boston Herald when Johnny Knoxville's movie, The Ringer, came out in 2005.

Now, look. I'm not about to become another McCarthy to police political correctness (no relation!).

So this is what I wrote. You can see a slightly edited version on page 31 of the current week's issue of OK! Magazine.

Director Ron Howard has learned that in comedy, there's an entirely other kind of dilemma: What words are safe to use in a joke? In the United States, the First Amendment protects our right to speak freely, even if it's in poor taste. We'd like to think that most of us have enough tact and good sense to know which words to say when, but in comedy, oftentimes people break that rule to get a laugh. In Tropic Thunder, Robert Downey Jr. sported blackface while he and the other actors debated going "full retard" for an Oscar. And that movie was a hit. The "joke" Vince Vaughn tells in The Dilemma may not be that good, but it's also not that unconscionable. Where were the protests when we needed them to stop Old Dogs?

Of course, when The Dilemma comes out, so to speak, I hope we learn that Vaughn's scene with the electric cars line was essential to the plot, as his character either learns he himself is gay, or discovers that cars have genders and electric cars prefer to have same-sex relationships. Until that happens, I'd just like to see filmmakers and comedians fight for their right to deliver good, funny jokes. Because from what we saw in the trailer, this joke was neither of those things.

Go! See! This! “Punching the Clown” with Henry Phillips opens its theatrical run in NYC

One thought on “Want to play devil’s advocate for a dumb gay joke that might not even be a joke? OK! Magazine”