As part of the busy opening night of the New York Comedy Festival, Louis CK sat down for a conversation at the Paley Center with Time magazine's James Poniewozik about the comedian's revelatory and innovative take on the sitcom with FX's Louie.

One thing I hadn't heard him discuss, and then relay to you, about the show was the split-second shot in the opening credits, in which an unidentified young man spins toward the camera to flip it the bird with his middle finger, all while Louis CK was eating a slice from Ben's Pizza around the corner from the Comedy Cellar. 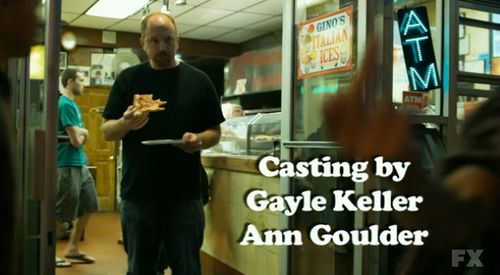 Here's what the comedian had to say about it:

"During the opening credits of the show, some guy flips off the camera. There was a young, NYU-looking kid — spiky hair and just real contrary. He was walking with some real "yeah fuck everything" type guy. I was eating the pizza and I saw them, and I was already thought 'Jeeesus.' I think they saw a camera and they saw people making a sincere effort in something… So one of them went 'YEAHHHH' and he flipped off the camera. And I remember that moment very well because I was eating pizza and I watched him flip off the camera and I could tell by the angle that we caught it. And I thought — when that happened, I knew we were gonna be on TV. Because that was when we were shooting the pilot, and it was a test. For some reason I remember seeing that and thinking, 'That's just meant to be. That's gonna be in the opening credits. It'll be fuzzy because I fucking know how the camera works. It's gonna be a little fuzzy because it's out of the depth of field and people are going to see it.' I just knew. That was just a sign to me. That we were going to get to be on TV."

Thanks to my friends at Funny or Die for duly recording the panel for posterity. The Paley Center also should have a video clip and photos from the event uploaded to its site later.

Quandary: Can you really take the laughs out of The Big Bang Theory?