All of the talk overnight of the shortest ever talk-show got people reminding me that someone already has been there and done that, and his name is Barry Sobel. 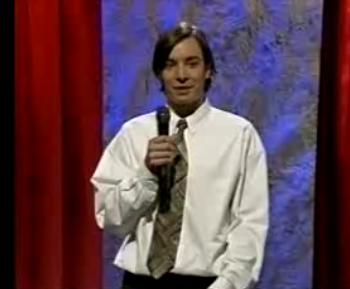 Don't let the long hair fool you. This fresh-faced kid was turning 22 in 1996 when he appeared on the very first episode of Barry Sobel's three-minute talk show on Comedy Central.

You can watch the entire debut episode here. Kevin Meaney plays the fictitious head of the network who informs Sobel in his monologue that he'll only be getting three minutes. Fred Willard plays Sobel's sidekick, and Rita Wilson gets honors as his first guest.

In a twist in which everything old is new again, Sobel is developing a new Internet iteration of his three-minute show, with help from Rita Wilson's husband, Tom Hanks! Of course, the relationship between Sobel and Hanks goes all the way back to the 1980s movie about comedians that comedians love to trash talk about, Punchline. Hanks had Sobel write for him and tutor him in the "comedy stylings" of stand-up, as it were. 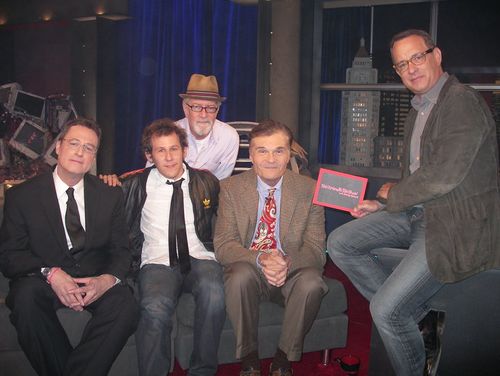 Here's a photo Sobel shared on Facebook from one of the tapings this fall, with musical guest Ben Lee.

Win $10,000 for your short film: The Friars Club can make it happen for your sketch or improv team