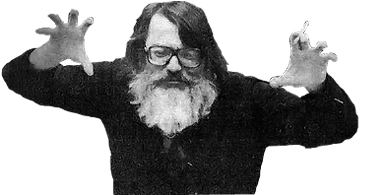 Well, I‚Äôll tell you a story. Del came out to California, and all of us who knew him sent him everywhere that had a show, resulting in him getting dopey parts on things like My Mother the Car. My show then was Get Smart, and I said, ‚ÄúDel, just go meet the casting gal,‚Äù who was Pat Harris, very famous in the casting business. ‚ÄúJust show up, so she has an idea of you physically, and we‚Äôll put you in the lab as a scientist, which is more than perfect for you.‚Äù So he went to meet her. I think he wore a white lab coat that he picked up somewhere. And he took a little box, a machine, with him to prove, I guess, that he was a lab-technician type. He told her to hold onto the two handles, and he put about 500 volts through her. She ended up on the floor. Thank God he wasn‚Äôt arrested.

— Buck Henry, co-creator and writer of TV's Get Smart, talking about the late Del Close. In an interview in October's "comedy" issue of Vice Magazine, Henry also discusses his work on The Graduate and SNL and much more. Read the rest at Vice Magazine: BUCK HENRY – Vice Magazine