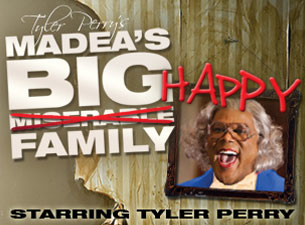 Madea's Big Happy Family has taken its toll on its writer and star, Tyler Perry, who told fans in a message on his site yesterday that he would have to cancel some of the dates on his current stage tour after Oct. 19, 2010.

The show's promoter sent out a press release saying all of the dates after Oct. 17 would be canceled, with refunds available. Ticketmaster listed more than 30 such shows and cities in the Midwest and South that would be affected by the cancellation.

From Perry's message to his fans:

You have no idea how hard this is for me to do but I wanted you to hear it from me first. After 125 performances in 126 days last spring, and doing two movies back-to-back this summer, then coming right back on tour and doing another 30 performances in as many days it's all become too much. I'm truly so exhausted…I feel terrible about this and hope you can understand but right now I'm not capable of giving you the show you want and deserve.  I hope one day soon I will be able to make it up to you.

Perry also has a new movie to promote, For Colored Girls, out Nov. 5.