If you're a fan of the late Robert Schimmel, but particularly on Facebook, then you've seen his family air some dirty laundry over the weekend as Schimmel's brother and eldest daughter squabble over how and whether to raise money for his surviving children.

Jeff Schimmel, Robert's brother who also is in the comedy business, posted multiple updates to his friends warning them against donating to funds established from outside of the Schimmel family, then expanded his warning to include even family members. He has since deleted those Facebook updates. But in an email, he told The Comic's Comic: "I cannot condone what my niece is doing, but won't go into detail.  Therefore, I can't recommend that anyone donate.  Draw your own conclusions."

On Robert Schimmel's Facebook Fan page, Jeff's niece and Robert's daughter, Jessica Katz, wondered today why her Uncle Jeff was trying to stop her. In an email to The Comic's Comic, Katz said: "I have no idea why Jeff doesn't want to help his family."

Last week, Katz established a fund to help pay for the medical bills for Schimmel's other daughter, Aliyah, and his son, Jacob, both of whom were also injured in the car accident that took the comedian's life last month. 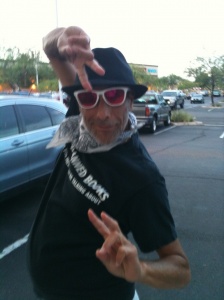 As she explained on the site Help Bob Schimmel's Kids, Schimmel already couldn't work due to the liver transplant he was awaiting before his accident, and "was literally selling the clothes off of his back on eBay to support his five kids," while also living with and caring for his own father in Arizona after the death of Schimmel's mother. Though already sick himself, Schimmel had taken his children out to dinner before the accident, and the kids snapped this final photo of him in the parking lot, dancing for them.

This portion was initially on the page, too, but since has been deleted.

Due to his health, his life insurance was minimal. He was truly in dire straits financially. Now his first wife Vick is unable to work due to the fact she has to spend 24 hours a day helping Aliyah through her recovery which is anticipated to be at least a year. And there are huge medical bills to be paid. And the family lost their health insurance when Robert died as well as of child support. There are hundreds of thousands in medical bills to be paid and in the aftermath of this terrible tragedy it is taking its toll on the family.

You can make payments to the Robert Schimmel Kids Survivor Fund directly via PayPal. It appears that those payments go to Schimmel's first wife, Vicki.

Schimmel also has two younger sons, Max and Sam, from his second wife, Melissa. They were not involved in the car accident. It's unclear what plans she may have in terms of tributes or fund-raisers, but reports from other family members indicate that Melissa was now in charge of handling any CD/DVD and other merchandise orders for Robert. Melissa and Robert reportedly were getting divorced but had not finalized it at the time of his death.

I honestly don't know what to make of all of it from a distance, but I do know that it's sad when a tragic loss divides a family rather than bringing it together.