The 2010 Major League Baseball playoffs have begun today, and with it, you had to know that TBS would begin ramping up what will become ubiquitous promotions for Conan O'Brien's upcoming late-night talker, Conan. Well, you're right about that. 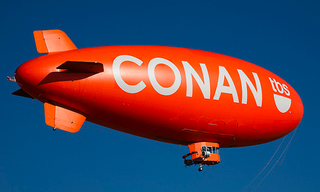 But there's more. Think, big, orange and up in the sky. Yes. You read the headline. It's the Conan blimp!

It's currently flying over Philadelphia today and tonight.

According to the Team Coco Blimp page, it's scheduled to fly over New York City on Oct. 9, Atlanta on Oct. 16, Tampa on Oct. 19, and Boston on Oct. 26. And yes, I'm painfully well aware that Boston is not a participating baseball city this October. Just roll the clip. 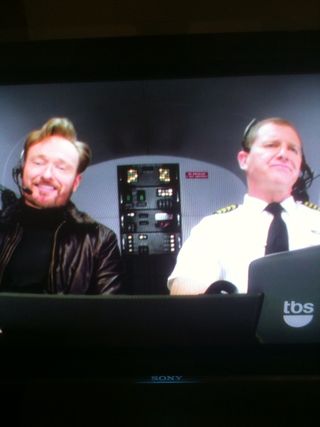 UPDATED: Oh, and in brand-new spots airing during the baseball games, Conan is seen in the blimp with the UCB's own Ian Roberts as his pilot!

Last Comic Tweeting: How many followers do your TV comedians have in 2012?

Where will you be on March 5, aka IHFS Day? Dave Hill would like you to join him, wherever you are

3 thoughts on “Look! Up, up in the sky. It’s big. It’s orange. It’s Conan: The blimp! TBS promo flies over MLB playoff cities”