I first saw Mike Bridenstine before I met him officially — we were both in Las Vegas for the HBO/TBS comedy festival in 2008, waiting to interview Kids in the Hall; me for this here online operation; him as a special correspondent for Comedy.com. I met him last year when he was a New Face at Montreal's Just For Laughs comedy festival. And now I'm seeing him frequently this week in Los Angeles, where he has a sofa and a mattress that only another comedian (or comedy blogger) could love. Bridenstine, aka Brido, has been seen in national TV ads for Carfax, Heineken and Dunkin' Donuts, and performed on Last Call with Carson Daly. This weekend he'll appear in an episode of iCarly on Nickelodeon.

He makes me laugh, whether he's saying "bang, you're pregnant," "aw, hell no," or joking about the weirdest karate place he has seen in Chicago.

You can see and meet him right now. 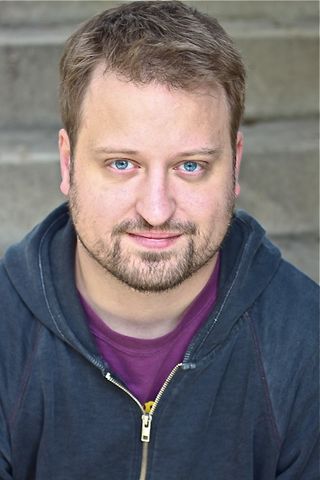 When and where did you start performing comedy? July 31, 2002, in Iowa City, Iowa. I hosted a weekly show with road comics at a bar called the Summit and I had several hilarious takes on "Joe Millionaire" and local Cambus drivers. Two other L.A. comics (Mike Holmes and Brooks Wheelan, who are both very funny) basically got their starts in that room too.

What was your best credit before moving here? I was in a group called Blerds, which was a thing on the Internet back when people used to care about that. Actually, all the comics and the director in that group are all very good and the people who read your blog are probably familiar with most of them.

Why did you pick L.A. over NYC or anywhere else?
Blerds was getting more attention in L.A. than New York. We had an L.A. manager and a monthly show at UCB. And I was dating a girl who lived out here. All of the above have mysteriously died since.

How long did it take to get your first paid gig in L.A. after moving here?
I got hosting slots at the Melrose Improv pretty soon after I moved here. I've confused it in my own memory about who vouched for me or booked me. But thank you to whomever it was. You know who you are.

How is this scene better/same/worse than the scene you moved from?
Chicago is a great place to do comedy when you're starting off. And that scene seems to keep getting better. But the payoff is bigger here. There's a light at the end of the tunnel. I wouldn't say that the L.A. scene is necessarily better. It's just more professional and less drunk, for better or worse.

Do you feel you've already "gone Hollywood" yet? What would it take to do that for you?
There are Chicago comics who have teased me for going Hollywood, I suppose. But I don't really know what that means. Anyway, check out my iCarly episode on Sept 25th at 8/7 Central on Nickelodeon.

What tip would you give to any comedian who moves here?
Go be funny. Don't be a piece of shit. Good things will happen.

Where do you see yourself five years from now?
Five years, huh? That's enough time to have everything I want, right?

You can see a recent longer set from Brido here. Or watch his performance from Carson Daly below.

Watch Big Jay Oakerson’s revealing interview with me, from my CMJ series with The Laugh Button