This is Myq Kaplan's exit interview. 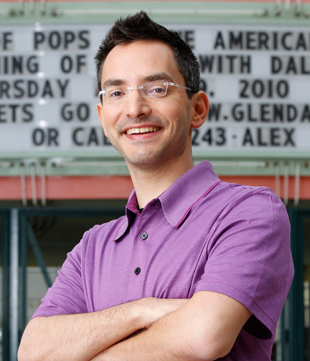 Age: 31
Hometown: Boston (among others)
Current city of residence: Various New York/New Jersey area locations
Tell me about the first time you did stand-up: The first time I performed in a comedy club, I was a college student in Boston aiming to be a singer-songwriter, and found that the Comedy Studio in Cambridge was amenable to my playing a few funny songs one night, so I did that. Louis CK, Jonathan Katz, and other great comedians were on the show, and I had mostly no idea who they were (Katz I knew), because I didn't know much about comedy at all. I'm not even sure if that counts as my first time doing standup, but I performed music at that club a few more times over the next couple years, until I decided I didn't want to lug a guitar around all the time, and that just talking to the audience seemed like even more fun. So at some point I just did that. Tada.

Did you audition for Last Comic Standing before, and if so, how did that/those experiences go: The show started very early in my comedy career, and the first season, I stood in line for the open call with a bunch of equally naive friends in Boston, only to be told after a very short audition that I wasn't ready. Which I wasn't. So, good. I believe I tried one more time at standing in line when I was in Florida visiting my grandmother in a later season, with similar results. Finally, last season I actually had a manager who helped set up a booked audition, wherein I went in without standing in line, only to be cut off by one of the celebrity judges about five seconds into my first joke. So, the way my previous auditioning experiences went was, let's say, consistent.

If you said yes, then what did you learn from your past experiences that helped you move further in the competition this year? I learned to be thankful that Steve Schirripa was not a judge this time.

When did you think you had a serious chance of winning this thing? When you asked this question right now. Or maybe right before it. Or after. Sincerely, every point of this thing has been full of a combination of optimism and knowledge of the statistical reality of the situation. Even now that it's over, I still think I have a chance. Time travel is still a possibility, unless science keeps dropping the ball.

How did you feel about the format changes in the contest this season, and was there anything from the old formats that you missed? I'm glad that the contest is basically just about doing standup, because I like doing standup, and I know how to do standup. I did enjoy watching Doug Benson's heckle contest, and I imagine it could have been fun to write roast jokes about the other contestants, or maybe have to do our acts for different kinds of non-ideal audiences, but in general, I am happy with the way this season has gone, so no regrets, let's say.

What are a few things about you that TV viewers might not already know? 1) my exact smell, because TV doesn't provide that information; 2) that I don't wear TV makeup all the time; and 3) some more serious answer I can't think of (because my life is an open book, or maybe a TV that you can flip to all the channels of).

Have people (civilians, comedians or industry) already started treating you differently? The civilians who didn't know who I was but now do have DEFINITELY started treating me differently in noticing me and recognizing me more often. And many people (including other comedians, my family, etc.) have been talking to me more about the show than ever before, and about how they're talking with OTHER people about me and the show more than ever before. As for industry, there's definitely a more concentrated stream of interview requests coming in than ever before (like this one… you're a part of the answer to your OWN question! Sorry to destroy your objectivity, journalist. You're in your own story!).

Do you have any funny moments that happened behind the scenes of the show that you can share? No. We are contractually obligated not to reveal anything funny. Or I can't think of any.

What are you most looking forward to about touring for the next several months with the other finalists? Planes, trains and automobiles. The movie, that I hope we'll watch on potentially long and unpleasant stretches of travel."

Did you make any side bets with anyone about LCS? No. Only front bets. (Is that a thing? I don't know betting lingo. Or do I? Want to bet? Sideways or frontwise?)

What advice do you have for anyone considering to try out for LCS in the future, if there is another season? Have a good time. Be yourself. Maybe. I don't know. Put in lots of hard work becoming a great comedian before you get there? Be the thing the judges and/or producers and/or voting public is looking for? Get lucky? Good luck!

The Talented But “Undateable” Mr. Morin