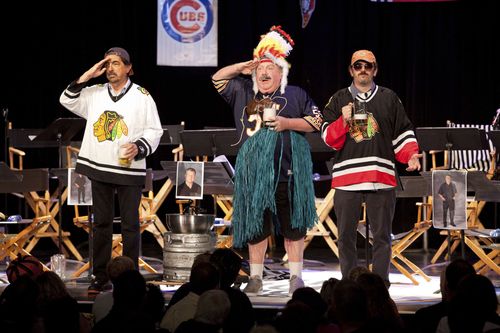 Back in June, Robert Smigel and Bob Odenkirk rounded up the "Super Fans" from their SNL sketches for a special live reading of their 1995 screenplay that never became a movie — the event at the TBS/Just For Laughs Chicago festival was called Da Bears Movie That Wasn't, and raised money for charity. It helped that they had not only the other living Super Fans in attendance — George Wendt and Joe Mantegna — but also Horatio Sanz reading the lines for the late Chris Farley, and Dave Koechner reading several zany parts, and oh, yeah, Coach Ditka.

I'd written about Ditka's appearance already, in which he autographed a plate with his photo on it flipping the bird back in the 1980s.

But I hadn't shared this footage before that I shot backstage immediately afterward with Smigel and Mategna, in which they talked about doing the "Super Fans" again. Roll the clip!

Not seen on SNL: Parody of the Netflix/Qwikster apology video