What if I were to tell you that Peter and Bobby Farrelly were putting together a collage of wacky comedy shorts to become the next generation's version of Kentucky Fried Movie? OK, now what if James Gunn were to tell you that, considering he has directed Elizabeth Banks and Josh Duhamel in one of the shorts for the "secret" "untitled comedy" film? 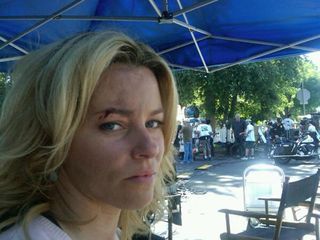 Gunn did just that, posting this description on his site to clarify the photo Banks Tweeted from the set July 1:

Anyway, I‚Äôm working on what can only be called The Farrelly Brothers Untitled Comedy. There‚Äôs another name for it, but I‚Äôm sworn to secrecy. The film is a collection of completely over-the-top shorts in the style of Kentucky Fried Movie (or, a film I prefer, if only for the classic Griffin Dunne hand-puppet sequence) Amazon Women on the Moon. Each short is directed by a different director ‚Äì Peter Farrelly, Bob Odenkirk, Brett Ratner, and more.

I‚Äôm directing one of the shorts, starring Elizabeth Banks and Josh Duhamel. I can‚Äôt really say anything else, except that the short also heavily involves 2D animation. Doing the Farrelly Brothers project has been a lot of fun ‚Äì for years now, I‚Äôve been told I‚Äôm going ‚Äútoo far‚Äù, by movie studios, television networks, Spike.com, XBox, etc, etc, etc. Finally I‚Äôve met my match in producers Peter Farrelly and Charlie Wessler who kept telling me to go further, make it grosser, more violent, and overall more fucked up.

He said the film is in post-production now, so more will be revealed soon enough.

IMDB isn't always 100 percent reliable, so, that said, here is what that site has listed for "Untitled Comedy."

The rules of comedy, as told by Ricky Gervais to Piers Morgan on CNN. No apologies!