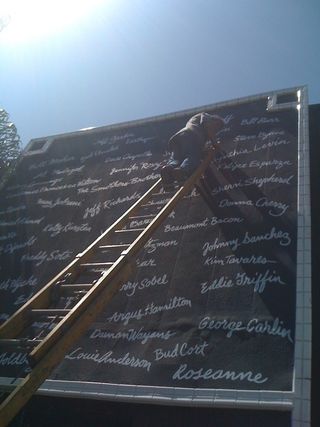 Perhaps you have seen some of the legendary names of comedians on the wall outside of The Comedy Store along West Hollywood's Sunset Boulevard. For the first time in nearly eight years, the comedy club has added to the list of names. The celebration, known as Names Night, happens tonight at the club.

As the club wrote on its Comedy Store Tumblr: "Names Night means so much to the comics being honored.  It solidifies their place at The Comedy Store and is physical proof of the great efforts they have put in to their careers.  We will have comics performing in the Original Room and a reception in the Main Room with floating photographers, food, and comic interviews.  Very special guests will be dropping by including Louie Anderson, Andrew ‚ÄúDice‚Äù Clay, and more! There will be a private reception for honorees that night, but the general public is welcome to attend the show for free (21+, 2-drink minimum)"

Jay Leno tells Joy Behar that NBC screwed over Conan (and himself, obviously?)

One thought on “The Comedy Store adds signatures to its wall for first time in eight years; Names Night tonight”