Chicago sports fans at the first of two sold-out "Da Bears" shows Saturday night at Just For Laughs Chicago were treated not only to a roast of former Bears coach Mike Ditka, but also saw Robert Smigel and the rest of the famous Saturday Night Live "Superfans" auction off a commemorative plate with Ditka's picture, flipping off a fan during the 1980s, to raise money for the Gridiron Greats Assistance Fund. Turned out that Cubs pitcher Ryan Dempster, also in attendance, offered $3,000 for the plate in exchange for Ditka's promise that he'd show up to a charity event Dempster is hosting in July. 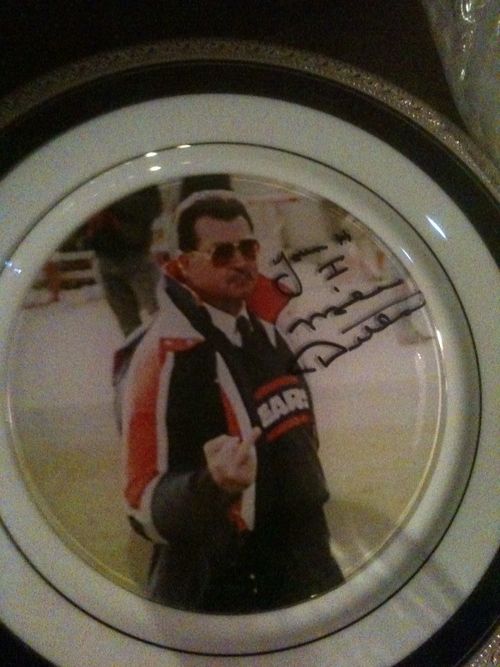 As for the photo itself, Smigel said the infamous photo was taken in Green Bay, but Ditka corrected him and joked that the incident happened with a drunken fan at Chicago's Soldier Field, and added that a member of the paparazzi inspired him to also make another offensive gesture with his hands.

Ditka grabbed the plate to sign it and jokingly asked, "How do you spell Barack?" Of course, back in 2004, Ditka almost ran against Barack Obama for the U.S. Senate seat in Illinois as a conservative Republican. If the Superfans had their way, Ditka would've won and we would be living in an alternate universe. But Ditka didn't run. Nor did he take a jab at Obama in this autograph.