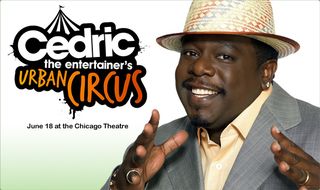 Wait. Seinfeld? Jerry Seinfeld?! That sounds a bit different from Cedric's last televised special, which he did with Shaquille O'Neal. Can you say upgrade? Cedric, who talked to me yesterday about his special and more, laughed it off.

"I don't know man. I don't know if I'd put them in the same category," Cedric said. "Seinfeld will at least talk, that's one thing we can look forward to is him doing words."

Cedric said his special will feature a combination of his stand-up, that of the other performers and more. "I'm doing this narrative of my life with how life is a circus, and how life is all the funny things you see in your life," he said. "I've got a church choir that's going to join me, acrobatics who do stuff on mattresses. I call it ghetto gymnastics." He also does "a step, stomp interlude" that's a tribute to his days in the fraternity Kappa Alpha Psi. And there also will be pre-taped appearances from Steve Harvey and D.L. Hughley, who performed alongside Cedric in the 2000 documentary film, The Original Kings of Comedy.

Can you believe it has been 10 years? How is comedy different now? "We definitely recognize the influence it had on stand-up and live shows. The influence that it added to our careers in all sorts of different ways. We've been able to manipulate it and use it for our growth. After the passing of Bernie (Mac), we didn't know how to approach it (in terms of a reunion)…there's been some talks about how to kick it back off."

What about comedy now for everyone else in the game? "It seemed like 10 years ago, a Bernie Mac, all he had to say was people were scared to give him a TV show, and they gave him one. Nowadays the business is generally slow all around, but definitely for black men and women, and Latinos to break out. There's less of that. Opportunities to be seen in a way to stand out. It'll take people a lot longer to see that new generation of star…that comedian who has a unique voice."

That's strange to think that, since you'd think with YouTube and all of the technology we have, there'd be so many more opportunities for comedians to break out. Or do you think that just makes it tougher for any one person to stand out? "We get information so fast. This whole interview may be on Twitter in 20 minutes. You try to sit back and savor. There's so much information, and people ReTwitter somebody's joke, and then you may think it's their joke. Write your stuff…plagiarism may not even matter anymore…they say it don't matter where I got it from." Of course, this just makes the road a little longer and tougher. "If you haven't been able to make a name for yourself, find an opportunity to get on television and get known, it will take a lot longer to build a career for yourself."

Sounds like perhaps you're skeptical of this new technology? "I Twitter a little bit. Because when I did the Tom Hanks movie (the upcoming Larry Crowne), everybody was Twittering, including Tom Hanks. I felt like the only dude without a microwave. Hold on, let me warm my lunch up!" He's @CedEntertainer. Verified. "I do social media, got a little facebook page. I don't do it a lot. I have my assistant use it. But that's where it is. You've got to do it."

Here's a clip of Cedric on Lopez Tonight earlier this year, joking about Shaq and more:

Speaking of TBS…Are you looking to make a TV return anytime soon? "We've been looking it. There's been talks with TBS do something else. They've got a lot going on there, they're really making a run at comedy. There's opportunities over there, maybe. I had a running deal with ABC for three years to develop a sitcom for them. We just never really quite found it. We shot a couple of pilots. We wrote up a treatment, but never got it right. I want to hit it hard with something that will have some longevity. It's just something that's got to wait."

With your specials, past and present, as well as your TV series, Cedric The Entertainer Presents, it seems as though you really have been true to your nickname, since it's not just about telling jokes but about entertaining through music, variety acts, sketch and more. Is that why you've always had that name, and not Cedric The Comedian or something else? "It's one of those things I think I grew into. I even got the name in a haphazard way. I was performing and had gotten very popular locally. People wanted to hire me to do 45 minutes, 30 minutes, and I wanted the money. So I would fill with singing, dancing, a whole soul routine to fill the time. And the MC introduced me as a comedian. I didn't feel comfortable doing that. I said, so, call me an entertainer…it wasn't call me, 'Cedric The Entertainer.' It was just call me an entertainer. But he brought me up as Cedric The Entertainer, and when I got done, he called me Cedric The Entertainer. So I took it. And I've grown into it from that. My show has always been a thing were I wanted to do a whole bunch of things. When I get a budget, and money to spend, I want to get all of these ideas out from my head. I'm really fortunate and blessed to have had this many opportunities, and have fun."