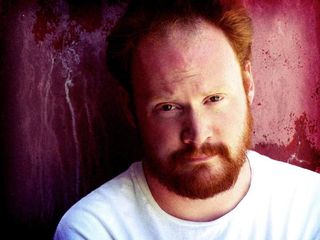 The first time I encountered Matt McCarthy (pictured here by Anya Garrett), he was wildly ranting out of a giant book in a tiny room in Mo Pitkin's for a show he ran called "Max." I never learned if he named the show after a person named Max, but I did figure out that this McCarthy (no relation) took his comedy to the max, so to speak. And now you most certainly recognize him either as the "cable guy" from the Verizon TV ad campaign, or from his Front Page Film shorts with Pete Holmes and Oren Brimer. He also hosts AMC's "Action Pack" with fellow comedian Nick Stevens. You'll soon see him in a role in the new Will Ferrell film, The Other Guys.

Matt McCarthy released a new CD this month, Come Clean. His greeting track, a series of character introductions, is one of those bits that's structured in the way that just when you want to stop laughing and think enough, he gets you laughing again, or harder, for four minutes straight. He's also a redhead who won't date a redhead or celebrate St. Patrick's Day, is prone to screaming and sweating, and will do that and more to entertain you. He even dedicated a preview track just for iTunes, and closes by answering 25 questions to know someone better. Here he is answering just a few more for your reading pleasure.

When and where did you start performing comedy? My father's retirement party, I did an impromptu set on my old man. Then I started doing open mics at NY Comedy Club and wanted to kill myself.

What was your best credit before moving here? Captain of my high school swim team.

Why did you pick NYC over LA or anywhere else? There is no choice when New York City is involved.

How long did it take to get your first paid gig in NYC after moving here? I don't know, I still don't get paid.

How is this scene better/same/worse than the scene you moved from? I started in NYC. There are shows in Providence I guess, but I've never done them.

Do you already have an "only in New York City" moment yet? I was here for 9/11, but that could've happened anywhere like DC or Pennsylvania.

What tip would you give to any comedian who moves here? Perform every night you can, go to as many shows as possible.

Where do you see yourself five years from now? On a hoverboard saving my kid.

If you'd like to see Matt McCarthy live, he'll be starting up a new monthly show at Comix, The Matt McCarthy Stand Up Comedy Comedy Show, debuting May 27. Here's a video promo for his CD, Come Clean, an earlier look at track #15 "abortion" from his Live at Gotham appearance, and CD purchasing info: