I was among the witnesses for Marc Maron's live taping of his WTF podcast over the weekend from the Bridgetown Comedy Festival, in which Hari Kondabolu, Ian Edwards and others gave Maron the business in front of a packed live audience. That should be a fun one to listen to. 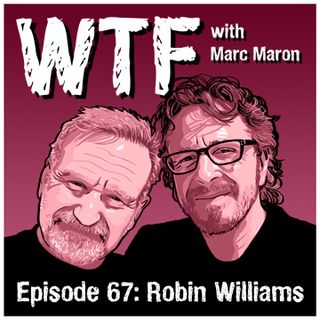 Maron told me in Portland that this new episode of WTF is even more illuminating. And listening to Maron spend an hour with Robin Williams, I can agree it's quite a treat. Williams treats Maron with sincerity for the hour, only rarely jumping into bits and characters, and talks about his recent relapse into alcoholism, dealing with life as a stand-up both now and back in the day, and even addresses the longstanding rumors that have dogged him about joke theft. Williams says when he drops in at comedy clubs now, he won't even pay any attention to the show before and after he's on, saying he'll sit upstairs in the restaurant instead (which I can attest to personally when I've seen him recently at the Comedy Cellar, where he always has been more than gracious toward other comedians). That latter part comes in more than a half-hour into Maron's chat with Williams from his Marin County home in Northern California. But the whole thing is worth listening to. So do it.

You can listen to the new WTF podcast with Marc Maron and Robin Williams here.

Comedians weigh in on the 2008 election