You may have formed an impression of George Lopez and his comedy based on his late-night TBS talker, Lopez Tonight, his ABC sitcom before that, or maybe you just know Lopez from his stand-up over the years. Then again, maybe you don't. I don't know you. 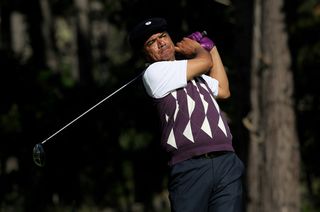 I do know that it was amusing to see NBC promoting Lopez in its TV advertising for last weekend's Champions Tour (Senior PGA) pro-am tournament, considering he was just in the news for welcoming Conan O'Brien into the TBS fold. It's true, though, that Lopez is one of several comedians who love to play golf, and not just for the televised pro-ams (where you'll often see Bill Murray, Ray Romano and Kevin James, among others). Yesterday, as rain cancelled the final round of action in Florida, Lopez talked to PGATour.com about his relationship with golf. I'm a golfer, so I enjoyed the whole interview. But for comedy fans, I'll excerpt a couple of points here for you now.

For one thing, Lopez said that golfing has introduced him to some of his better friends. Golfing always has had a reputation for business socializing, but it's just as good for performers as it is for suits.

More to the point is the kicker:

LOPEZ: If I had not played golf, I wouldn't have a career. I would not have the temperament that makes it perfect for this business. I was a hothead and I was dishonest. When I golfed I lied about score, I don't do that anymore. It was a valuable lesson. It's amazing.

Watch the “Reality Bites” reunion from the 2019 Tribeca Film Festival