Baron Vaughn (pictured by Anya Garrett) is what we call in the business, one of those quintuple threats. He can write and tell jokes, yes, but he also can act, dance, sing, rap, and has an intangible other quality that probably will revealed to you when you least expect it. You've seen him on Live at Gotham, Black Dynamite, as a talking funny head on VH1. He did HBO's Aspen festival in 2006. You'll see him Friday when The Awkward Comedy Show debuts on Comedy Central, Monday on Late Night with Jimmy Fallon, later this month at Bridgetown in Portland, this summer at Bonnaroo, on the big screen in The Other Guys with Will Ferrell, the small screen with Russell Simmons Presents, and this fall in the USA series Facing Kate. So, yeah. The guy's going places. Tonight, you can even see him live in NYC co-headlining at Comix! Let's get to know more about him. 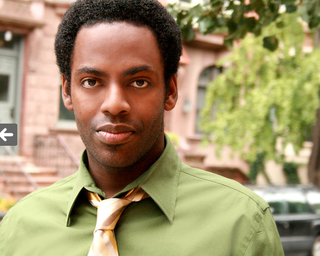 When and where did you start performing comedy? Boston, MA. A room called "The Vault" beneath Remington's Restaurant on Boylston right in the Emerson College area where every other comedian ever went. It was the summer of 2002. Just got back from a semester abroad watching stand-up and improv every week at the Comedy Store in London and was finally ready to give it a shot. I had wanted to for a while, but I knew that bombing and being awful was a part of the process. Once I got over myself and accepted that I wasn't gonna be a genius the first time I did 5 minutes, I was doing it well like a hook in an LL Cool J song. That song is about comedy, right?

What was your best credit before moving here? Probably "regular around town." A credit of which I was very proud even though it had nothing to do with anything.

Why did you pick NYC over LA or anywhere else? Well outside of saying "New York is the place to BE," I knew, at least for me, that if I wanted to get better there was no other place to go. It's grad school for comedy. I didn't want to go to LA because most things there always seemed more industry focused rather than craft focused. That's NYC vs LA in my opinion. If I moved any place else, it would have been to die.

How long did it take to get your first paid gig in NYC after moving here? Luckily I moved to NYC WITH a job. I was booked in a play on Broadway (and I DO mean to brag) during my last few months in Boston. So I had a paying performance job the first 4 months I was here. Then I was broke and worked at a law firm for over a year while I was doing stand up at night and auditioning from commercials during the day.

How is this scene better/same/worse than the scene you moved from? Well there are more rooms. Not only quantity but variety. There are more KINDS of rooms in NYC. Basically you could go from the Bronx to Brooklyn, hit every room in between and have completely different audiences with different expectations each time. It can really help turn you into a well-rounded comedian if you do it right. I still love Boston, though. The audiences are always smart and positive. In Boston, if you're any good, you get booked more which helps you get better. In New York, people that run shows, especially clubs, rarely see comedy anywhere else. They don't know what or who else is doing what. There are those who really help comedians develop and grow here, but I think it's more common in Boston. Maybe that's it. Boston is more supportive; New York is more suspicious.

Do you already have an "only in New York City" moment yet? I've had so many I can't even count. Only in New York could you have so many Only in New York moments that you just accept that things are like that. One of my favorite things I've ever seen was a teenage kid (who seemed like he had just come out and also didn't really need to beg for change) rush into a subway car, quietly announce he was gonna dance for us, dance and sing like a socially awkward teen, cuss everyone out for not paying attention, then run to the next car.

What tip would you give to any comedian who moves here? Don't not move here. Avoid bringers. As much as you might like the club, or the people producing the show, you are a walking dollar sign to them.

Where do you see yourself five years from now? Debt-free.

Here's a recent set of Vaughn as performed at Whiplash, the late-night Monday showcase at the UCB Theatre in NYC. Roll it!

2 thoughts on “Meet Me In New York: Baron Vaughn”