Mike Lawrence (pictured by Mindy Tucker) may not have won either the Comix "March Madness" nor the Carolines "Final Four" competition this year, though he gave it a good run. Lawrence also was nominated for an ECNY as an emerging comic. And he's definitely got an interesting perspective on life, which shines through in his stand-up. Get to know him! He's emerging! 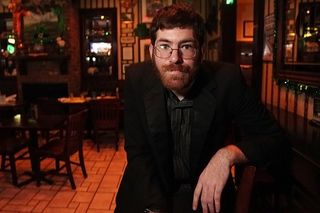 Arrival date: Jan. 14, 2007 (My birthday, and boy did I bomb that night. The place I ate it at has at least closed down but my memory of that night will always remain open)

When and where did you start performing comedy? I started at the Chocolate Moose Coffeehouse on Nov. 5 2005. I'm a very sentimental guy and remember it well. I had done poetry at that place for a few years and just decided that maybe comedy was the better option to artistically express what I was feeling. I had just lost part of my roof in Hurricane Wilma, wrote my first few jokes on a manual typewriter (What idealistic English major doesn't own one of those) and the rest as they say is open mic history.

What was your best credit before moving here? I was the runner-up in a contest at the Miami Improv. I won a turkey.

Why did you pick NYC over LA or anywhere else? I picked New York for 2 reasons. The first is that I can't drive because of a motor-skill impairment and this city has great public transportation and doesn't make me feel like a useless cripple the way Florida did. I'm still an emotional cripple, but at least I don't have to beg and fork over tons of gas money to get to gigs. The second is that I'm a gigantic comic book fan and I grew up loving the Marvel Comics version of New York. I live ten minutes away from Spider-mans childhood home in Forrest Queens and have done stand-up across the street where Dr. Strange's Sanctum Santorum is. Well, you know…It means something to me!

How long did it take to get your first paid gig in NYC after moving here? My first paid gig which many people righteously mock me for was done for a pornographic website called Reality Bedroom. They filmed me for 40 minutes in essentially what was an empty boiler-room. I'd do a few jokes and then plug to website every now and then. They poorly edited it to four minutes and piped in laughter, some of which is my own. It's still on YouTube. If anyone can tell me how to get rid of it I'd greatly appreciate it.

How is this scene better/same/worse than the scene you moved from? It's infinitely better. I just went back to South Florida to visit my dad for a few days and did two bar shows down there and it was so lawless. Comics run the light, goof around a lot more, and since there aren't many open mics, they use shows to do untested material. Because of how few comics there are and how slim the competition, the few good comics sometimes behave like their on a reality show with immunity. Fear is a beautiful motivator and there's a ton of it in New York. I will say that Florida is a good place to start because people don't remember your bombs as much as they do in New York, but you'll never push yourself as hard as you can when your not seeing greatness all the time. If you're only a year or two in and you're clearly one of the best people in the scene, that's a big problem.

Do you already have an "only in New York City" moment yet? Besides performing in a boiler room for a pornographic website? I've got a few, but my personal favorite has to be that first night of bombing on my birthday (Told you I couldn't forget it). It was at an art-star mic (if you don't know what that is then good. You're still innocent and pure and haven't seen a guy named Orion 3,000 do epic poetry about Paris Hilton or had to follow a seance). I saw Richard Pryor Jr. singing Bette Midler's "The Rose", watched a guy named Mangina (the man with a vagina. Yes.) dance and thought it was the strangest thing (I still do, don't worry). Then, I finally went up and then my tight six from Florida and got nothing. Just dead silence. The guy who rambled on about how Giuliani is the robot that will destroy us all did better than me. I was devastated. Sure enough, I wrote some new jokes and came back the next week.

What tip would you give to any comedian who moves here? Do it every night or don't do it at all. There's hundreds of comics here and a lot of them are better than you. You'll either get lost in the dust and drown in your own lack of progress and bitterness or you'll learn to focus on your strengths and give the audience something different. Be humble. Just about everything you thought you knew will be proven wrong. Mix quality with quantity. Instead of doing 3 mics every night when you get here, do 2 and watch the other comics and learn from them. The free mics tend to have higher quality of comedy than the paid ones, besides the fact that no one should have to pay to perform. Also, find some comedian friends with a like-minded sensibility. I've got some great ones, and they've helped me a lot.

Where do you see yourself five years from now? Dead from the grinding comedy lifestyle. I imagine being in a dimly lit bar in front of twelve lackadaisical patrons, and I deliver this very extravagant, crazy premise and then just drop dead from exhaustion and there's one fat guy with a beard who was really into it and he stands up and screams "What was the punchline?!!! Oh my god!! I'll never know!! I need to know!!" with the same kind of crazy bravado Burgess Meredith brought to his Twilight Zone performances. Either that, or touring clubs and colleges. I'm fine either way.

You can check out Mike Lawrence at a gig near you by looking at his MySpace page. Or check out this clip.

6 thoughts on “Meet Me In New York: Mike Lawrence”