The second "Women in Comedy Festival" kicked off last night in the Boston area, with shows continuing through the weekend at Improv Boston in Cambridge and Mottley's Comedy Club in Boston.

It could easily be another gimmicky thing. But to the credit of festival co-director Maria Ciampa and her fellow organizers, it's not. For one thing, it's not trying to exclude men. ‚ÄúThe ‚Äòwomen‚Äô in Women in Comedy Festival refers to the fact that WICF is directed by, produced by, and features comedy by the ladies,‚Äù Ciampa says. ‚ÄúHowever, men do comedy too, and we don‚Äôt want to exclude anyone. The festival's mission is to create a forum for people to experience the comedic expression of women, see strong female performers and, most importantly, to entertain.‚Äù

So, yes, they've booked funny ladies such as Maria Bamford, Jackie Kashian, Bonnie McFarlane, Kelly McFarland and Giuila Rozzi, in addition to dozens of other comedians (including a few men) for stand-up, improv and sketch shows each night. 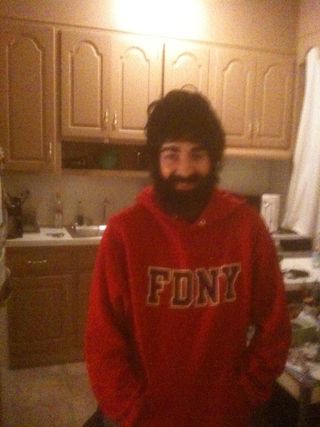 Bonnie McFarlane is currently filming a documentary about women in comedy — I saw her and her husband, stand-up Rich Vos, interviewing Chris Rock for the project recently at the Comedy Cellar, and know she'll be working more on that this weekend. Here's an interesting shot Vos took of McFarlane earlier this week, when she donned a disguise as man to perform at Stand-Up NY. It'll be interesting to learn how the audience perceived her jokes as a man, compared to how they'd react to her as herself. But that's just one aspect of what it's like to be a woman in comedy.

Perhaps more important than the shows themselves are the workshops and the panel — and even theWICF blog – because that's where the women in comedy can truly celebrate and support one another.

On Saturday, Jackie Kashian talks about getting road work and dealing with bookers, Zabeth Russell helps you simplify improv scenework, Maria Bamford takes part in a free afternoon open mic, and a free panel discussion talks and takes questions about the comedy business.

On Sunday, Cameron Esposito leads a workshop on the confidence and skills women could use in starting a stand-up career, Giulia Rozzi leads a storytelling workshop, and Loretta LaRoche will talk about the business of comedy.