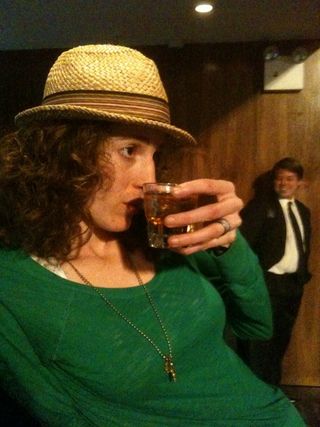 Everyone has a different reason for coming to New York City to pursue a career in comedy. Just like regular people, some comedians arrive here with a gig already in hand. Morgan Murphy made the trek (back) last year to take a job as a writer for Late Night with Jimmy Fallon. She's also up for an ECNY Award for best female stand-up comedian. I think she's very deserving of such honors and praise. Certainly you'd like to know more about her!

When and where did you start performing comedy? Technically my first set was in the front room at the Gershwin Hotel in NYC (I was in the city doing an internship), during the summer of 2000. I think there were 3 people there. After the summer I went back to LA to start my sophomore year in college. That's when I started doing shows regularly.

What was your best credit before moving here? I spent a couple years writing on Jimmy Kimmel Live, but The Guys Choice Awards on Spike is pretty high up on the list.

Why did you pick NYC over LA or anywhere else? I had spent two years traveling, doing stand-up for pennies, and going to therapy. Basically, I lived off savings and don't regret it, but just when I figured I'd start working again, the guild went on strike, and then the country plummeted into economic ruin. When the fine folks at Late Night with Jimmy Fallon offered me a job writing jokes in exchange for money, I couldn't refuse. The job happened to be in New York, and that's why I'm here. Not to say I wouldn't have come here otherwise. I always wanted to try it out, mostly for the "abundance of stage time" I've read so much about in the brochures.

How long did it take to get your first paid gig in NYC after moving here? I settled into my job for a couple months, then went to clubs and introduced myself. It was intimidating. I spent about 9 years in LA doing stand-up and moving up the ladder or whatever you want to call it, so starting over seemed a little daunting. When I moved, I had friends here at some of the "alt" rooms, but I wanted to do clubs too. I basically introduced myself to bookers, and asked if I could showcase sometime…some said yes, some said "send me an e-mail" and then never got back to me. Stand-Up NY gave me a short showcase pretty quickly, "passed" me, and was the first club to give me a paid spot.

How is this scene better/same/worse than the scene you moved from? It's better, it's the same, and it's worse. All of 'em. I've seen comics here who are as good as the best I've seen in LA, and vice versa. In the clubs, I think the comedy here tends to be a little more opinionated and aggressive, and I definitely see people turn over material faster. I think the weakest "character" in NY comedy is the angry guy with no material. And the weakest part of LA comedy is the "actor" doing stand-up. Folks like Jim Norton, and Nick DiPaolo, and Colin Quinn…guys who I guess you would call "New York comics"… they're great fucking comics. But so are Patton Oswalt, Maria Bamford, Tig Notaro, and a lot of comics who tend to stay LA-based. I guess folks in NY would call Louis CK a NY comic, but 99% of the times I've seen him were in LA…so how do you categorize someone like that? Is he owned by a coast? There's this huge pool of younger folks who have hopped around all over the place. Mulaney, Kroll, Hannibal, Jeselnik, those are pals from years back and I see them as often in one city as I do another. What I'm trying to say is, I have no clue what scene is better. Moving to NY, I've been lucky to be able to watch a lot of people perform who I'd never see unless I happened to catch them on TV, and it literally makes me giddy. But the best thing about the comedy world is that I can go back to LA, talk to a comic there, ask them if they know so-and-so from NY, and if the answer is "no," and I quote some joke of the NY comics that I love, it's like that LA comic immediately feels like he knows that NY comic, or at least respects him/her. When they meet, the LA comic will say, "Ohhh, you have that joke! Morgan told me." Then the NY comic will say "You know Morgan, I love her, she's the most beautiful, amazing person in the world." Then those two comics will be best friends forever. The End.

What tip would you give to any comedian who moves here? START here. As someone who started in LA, I say start in NY. Or even start in your hometown for a couple years, but definitely build as a comic in New York. It's much more focused on just doing stand-up, without being distracted too early by the whole hollywood thing.

Where do you see yourself five years from now? I'd be lying if I said I'll still be in New York. The perks of living here are great, and I'd love to see how much stand-up I could do here if I didn't have a full-time gig, but I don't know if living in a dark, gray city is a good long-term fit for a dark, gray person. Whatever one's criticisms are of LA, the weather is beautiful, and I think I need that in large doses. Professionally I have no clue what I'll be doing. I've never had many specific goals. I find that it helps to do whatever it is that I do and see where that leads (which I'm pretty sure is just another way of saying I'm lazy). Maybe the next time I start to run out of money I'll make a list or something.

For now, you can see Morgan Murphy around New York City at clubs such as the Comedy Cellar and Stand-Up NY. There's not a lot of new video of Murphy's stand-up. Here's a clip from her January 2009 appearance on Kimmel. Roll it!

4 thoughts on “Meet Me In New York: Morgan Murphy”