I'm not sure how or why, but Toyota is throwing a contest that allows fans to "Sponsafy Your Ride" for an upcoming NASCAR all-star race, and comedian Jon Glaser, star of Adult Swim's Delocated, decided to design his own ski-masked ride as part of a promotion for the upcoming second season of his TV series. 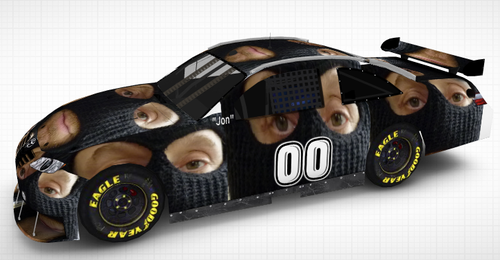 Actually, he submitted a "Rage Cage" design earlier, but that got rejected. This one is in the running, and had 578 votes by early this morning. You can check out Delo-Car-Ted 2 and the rest of the gallery here.

As Glaser wrote yesterday on his Tumblr for the show:

Eddie Murphy says he’s itching to return to stand-up, shows he can still do a Bill Cosby impersonation

One thought on “Would you like to see Jon Glaser’s ski-masked face in NASCAR? Vote for Delo-Car-Ted 2”