What do they say about New York City: There are eight million stories, and sometimes it seems as though eight million of the people telling them think they’re comedians? No, that’s not it. It is a fact, though, that America’s biggest city is also its biggest comedy mecca. Hollywood may be Hollywood, but New York City is where comedians are born funny, become funny or arrive to thrust their funny upon us. I think we should meet some of these people. This is a new recurring feature, a mini-profile of newcomers, up-and-comers and overcomers of New York’s vibrant comedy scene. It’s called Meet Me In New York. 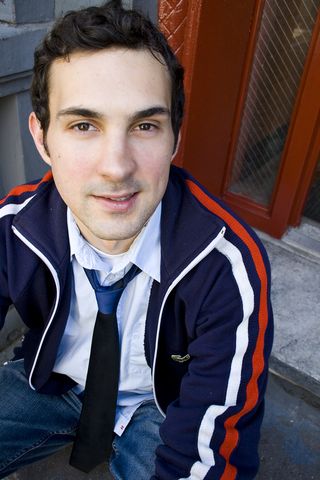 The New Orleans Saints won the Super Bowl yesterday, and to celebrate, I bring you a look at another stand-up comedian making the transition from Bourbon Street to the Big Apple. Get to know the wry comedic stylings of Mark Normand.

When and where did you start performing comedy? The first time I ever did stand-up was in Lafayette, Louisiana, three hours from New Orleans. I was a waiter at a Mexican restaurant in college and a co-worker there did stand up and I thought he was the coolest guy in the world. He mentioned he was doing a spot one night in Lafayette and I asked if I could drive him. When we got there I put my name on the list and spent all the money I had on getting completely sauced and did a set. I bombed and ran the light so bad that they cut my mic and turned on the music. I remember the host did that joke: “Please turn off your cell phones and beepers. And if you still have a beeper. get with it!!” I thought that was brilliant! The hosts name was ‘Special Ed’. Then eventually I started doing mics in New Orleans and that’s where I met all the New Orleans Jews we all know today.

What was your best credit before moving here? Hmmm…I guess the biggest thing I’d done before I moved here was open for Tom Rhodes at One Eyed Jacks in the French Quarter. One Eyed Jacks is that type of venue where all the fun “indie” shows happen, every city’s got one. It was the scariest show I’d ever done at that point. A huge room, cocktail waitresses, a balcony, even a green room!!! Not to mention, it’s the first time my parents would see me perform. I also thought Tom Rhodes would immediately sign me and ask me to tour with him but I couldn’t even get him to talk to me.

Why did you pick NYC over LA or anywhere else? I’d lived here before in 2006 because I went to film school at NY Film Academy. I lived in a two-bedroom in midtown with four Indian guys and loved it. I was really bummed when I had to move back. So after I started getting really into stand-up and talking with some other comics about the big move, LA wasn’t even an a thought for me. To me, New York is where you get good and LA is that place you go when someone asks you to. I love New York.

How long did it take to get your first paid gig in NYC after moving here? Paid
gig?? Slow down Seany! What is this the 80’s!!? No, my first paid gig took about a year. It was a Jew-themed show and the host said he couldn’t afford to pay us but he would cover my cab fare so I just took the train there. A cab? Who am I, Byron Allen?

How is this scene better/same/worse than the scene you moved from? In New Orleans you can get up twice a week if you’re lucky. And those were just mics. There is not enough stage time there if you want to get really good really fast. There are some great comics in New Orleans right now but doing stand-up in NYC for one year is like doing three years in New Orleans. I am extremely glad I started there though. Not only did I meet my mentor and life coach Zach Sims but I got to stretch out a little and have fun and see what stand up was all about before jumping in to the big city.

Do you already have an “only in New York City” moment yet? I have a few. Once I was being mugged in Crown Heights, Brooklyn at like 5 a.m. and 5 guys ran over and started
beating up the guy mugging me. I was so scared I ran away and never had a chance to thank them. But the funniest moment is one night Zach Sims and I came home late from a mic and there was a pigeon perched on the closet door just standing there completely still. We noticed it and looked at each other. We had just moved in so Zach convinced me it must be fake and have belonged to the previous tenant. I said “ok” then we watched tv for a couple hours. When we decide to go to bed Zach puts down his air mattress an the pigeon starts flyng around the room! We both immediately started screaming and ran to each other. I think that’s the day Zach lost faith in God. We were terrified. We went
in the kitchen and tried to pull ourselves together but we couldn’t, we were too freaked out. It just kept flying around in our tiny apartment. I started throwing shoes at it but that just pissed it off even more. Hours are going by, it’s shitting in our apartment, it’s awful. I remember Zach kept rubbing his face saying “I just don’t know, man.” At one point we actually thought about calling Sean Patton because he’s the only guy we knew here and he was actually a man. He didn’t answer. Then we go outside and call animal control, yes, animal control. So here we are, two out-of-towners, on the sidewalk at 4 a.m. in Crown Heights, Brooklyn freezing in our pajamas calling animal control for a fucking pigeon. The pigeon had kicked us out of our apartment! I begged animal control to come out to the apartment and of course, they wouldn’t. They said the three magical words though: open a window. So we psyched ourselves up and go back in with a plan but the bird is sitting on the window. At this point I remember thinking “Is this why it’s so hard to make it here?” Now it’s like 5 a.m. and we’re tired so we lay together on the bed and doze off every now and then until it starts flapping its wings which makes us wake up screaming and clenching each other. Finally, I’m pissed, I hit it with a shoe, it
flies away from the window I open it and it flies right out as if to say “God, you’re an idiot.” Zach and I danced around the apartment in joy, I think we may have even kissed.

What tip would you give to any comedian who moves here? I’d say just be funny, hard-working and be patient. Don’t expect things right away and stop getting angry you’re
not getting stuff, it’ll happen. And introduce yourself to people, say hi and be nice. Always be nice. And definitely don’t have a baby.

Where do you see yourself five years from now? Yowsa! Who knows? In 5 years I’ll probably be teaching a comedy class in Paramus, New Jersey. Who knows? Hopefully
still doing stand-up.

Where can you see him? I was caricatured in MAD magazine, been in Time Out New York. I run two regular shows, Hot Soup every Friday at 8 at O’Hanlons, and We’re All Friends Here at the Creek in LIC once a month; next one is on 2/27. In March I’m at the
Laughing Skull festival in Atlanta, and in April at the Bridgetown Festival in Portland, Ore. Here’s a clip of Mark Normand discussing a cop movie cliche. Roll it!

4 thoughts on “Meet Me In New York: Mark Normand”