Perhaps you have seen the clip circulating on the Internet this past week of Louis CK explaining how he took down a heckler? The comedian was shot talking on the streets of New York City as part of a new documentary by Jordan Brady on stand-up comedy, "I Am Comic," which makes its debut screening this Jan. 27-28 at the Slamdance Film Festival, the alternative to Sundance in nearby Salt Lake City.

"I Am Comic" explores the world of stand-up comedy, interviewing many practitioners of the game and also including a narrative arc for Ritch Shydner as he mounted a comeback to the stage after 13 years away from the circuit. Here's a clip in which several comedians — including Sarah Silverman, Nick Kroll, Bobcat Goldthwait and Shydner — talk about the pros and cons of being a stand-up in the age of social media networks and Internet videos. Roll it!

As Brady says on the Slamdance program: 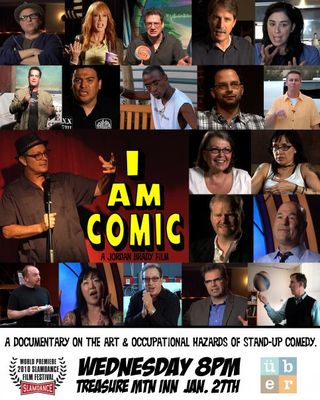 "Mostly, I was a one-person crew. So I‚Äôd meet the comedian for the first time, then we‚Äôd go backstage where I‚Äôd wire them with a small microphone. There‚Äôs something very humbling about sticking your hand down someone‚Äôs pants that you‚Äôve just met. Especially while holding a small camcorder."

I caught up with him on the Internet to ask him a follow-up or two, asking him how long it took to put the film together, and what his plans are for future screenings and distribution. His reply: "It took a year-plus to prep, shoot, edit. I plan to get distribution and tour the film with the comics showing up." He hopes to have it sold by February, when he also is planning a Los Angeles screening.

The Internet also says that in his comedic youth, Brady had guest parts in episodes of Baywatch, Dream On, Empty Nest, Parker Lewis Can't Lose, Who's the Boss and even an after-school special! He went on to direct a few small independent movies, but since 2003, he has made his name and his career as a director of national TV ad campaigns. After the jump, I've included one of the hundreds of commercials Jordan Brady has helmed…

Trivia time: If you watch TV, I'm fairly sure you have seen this one. Meet…Erica!

5 thoughts on “Jordan Brady takes his documentary, “I Am Comic,” to Slamdance: “Bow-Chicka-Bow-Wow!””