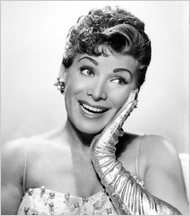 Jean Carroll, who along with Moms Mabley blazed the trail for pretty much every woman who decided to get into the male-dominated world of stand-up comedy, died on New Year's Day, just shy of what would have been her 99th birthday.

Carroll became famous in the 1940s, as her New York Times obituary noted, when the other half of her duo act — her husband, Buddy Howe — went off to fight in World War II. If the guys could tell jokes about their wives, she could tell jokes about her husband and her "rotten child." She was spotlighted briefly in last year's PBS mini-series documentary, Make Em Laugh, but the Make Em Laugh site didn't put her video online. Here's an older radio segment on Jean Carroll, and here is a clip from her 1959 appearance on The Ed Sullivan Show.

As you watch the routine, just think about how far we've come, or haven't come, in talking about gender and comedy. There Jean Carroll was, at 48, on the TV, in a nice dress, looking pretty, telling one joke after another, after another. So many punchlines per minute packed in there. Now think about how many women do that today. Not the joke-telling part (because there are many now), but about the looking pretty part. You could argue that male comedians have gotten all-too casual over the years, too (except for maybe when appearing on Late Show with David Letterman, which is on the same Ed Sullivan stage — coincidental tangents!). But people don't get into arguments about male stand-up comedians and their appearances, and yet they do about women. Why can't women be pretty, funny and pretty funny, without somehow being ashamed of their beauty or using it as a weapon? If Jean Carroll could do it, what's your excuse?

7 thoughts on “RIP: Jean Carroll, pioneer for women in stand-up comedy, dead at 98”