When I visited Los Angeles last month, I had the unique opportunity to visit the set of the upcoming movie, Due Date, starring Robert Downey Jr. and Zach Galifianakis. During the lunch break, Galifianakis invited me back to his trailer, where I'd get an exclusive interview with him as comedians Bobby Tisdale and Brody Stevens (both of whom also have small roles in the film) watched. And then Galifianakis took over The Comic's Comic, and decided instead to interview Tisdale and Stevens. This is some of the edited footage. Now even more timely, since the previous Phillips film starring Galifianakis, The Hangover, is out today on DVD and just got nominated for a Golden Globe for Best Comedy! Congrats! Roll the clip!

Fun fact? A reporter from Entertainment Weekly also had a "date" to speak with Galifianakis. So if you're wondering where this photo and information below came from, know that the EW reporter had to pick up the pieces after our silliness. 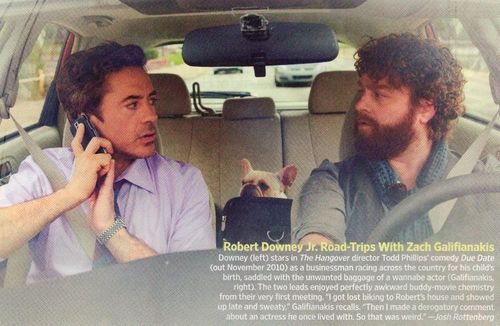