In this installment, we take a look at a guy who surprised me last year with his pitch-perfect Dave Chappelle impersonation. He'll make his TV debut on Comedy Central's Live at Gotham on Dec. 11. But meet him now: It's Dan Soder. 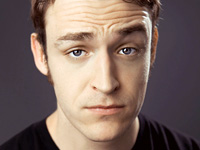 Arrived from: Denver by way of Tucson

When and where did you start performing comedy? Tucson in July/August 2004

What was your best credit before moving here? Opening for Troy Baxley and Ben Creed.

Why did you pick NYC over LA or anywhere else? New York is notorious for making people better comics, there‚Äôs more stage time and you‚Äôre exposed to a ton of different styles. I just didn‚Äôt feel like L.A. fit me, plus my car was on its last legs and I didn‚Äôt want to sink more money into it.

How long did it take to get your first paid gig in NYC after moving here? About a year.

How is this scene better/same/worse than the scene you moved from? Tucson was a great place to start, I got to go from open mics to MC‚Äôing to featuring all in the comfort of the same club. There were other clubs and casinos within reasonable driving distance so you got a taste of what the road was like, plus I got to work with comics that are really funny and influence me to this day. When I got to New York, I quickly saw how competitive and talented a lot of the comics were, so it made me rethink my act and what I was doing.
In Tucson, if you worked, the worst-case scenario was going up in front of 15 people, even the mics had an audience (besides comics), but in New York you can go up in front of three people at 1 a.m. On the other hand, in New York you get to see national headliners work out new stuff and do the same room you‚Äôre doing, which kind of blew me away at first.

Do you already have an "only in New York City" moment yet? My second month in the city I was waiting to go up late at Stand-Up NY and the producer of the show taps me on the shoulder and tells me I‚Äôm not getting up that night, when I ask why, she pointed and Chris Rock was standing there.

What tip would you give to any comedian who moves here? Be out in clubs/shows/mics every night.

Where do you see yourself five years from now? Maybe sober, a nonsmoker, telling everyone the world should of ended in 2012. Basically waiting for the apocalypse.

Here's a recent clip of Soder performing at the "Comedy as a Second Language" show, Thursday nights at Karma in the East Village. Roll the clip!

4 thoughts on “Meet Me In New York: Dan Soder”