I was going to say something about Tracy Morgan, but before I do that, let me take a moment to note how the other alums for Saturday Night Live are getting love in a variety of ways (and I'm not just talking about Chevy Chase's lovely return to TV with NBC's Community, although there is Chevy to be chased in this post) on this, the show's 35th season.

First, I don't know how many of you noticed the new T-Mobile ad during last week's live SNL broadcast. Companies have gotten rather shrewd about incorporating humor and SNL-type elements in their real ads that air during the breaks on NBC's SNL telecasts; T-Mobile's new ad for its myTouch 3G takes the cake for SNL-relevance (although you're a couple of weeks late for me, since I just got a new iPhone 3GS!). Here is that ad, featuring Chevy Chase, Molly Shannon, Dana Carvey and Darrell Hammond. Roll the clip!

And it's beginning to feel cold like Christmas in NYC on recent windy, chilly nights, and in a month, the window display at Barney's New York store will devote its holiday display to the 35th anniversary of SNL. The reported scenes include classics such as the Coneheads, last year's Tina Fey/Sarah Palin sensation, and a couple of nods to the late 1990s, including Molly Shannon's Mary Katherine Gallagher and Chris Kattan's Mango. Here's one of the draft sketches from Barney's New York creative director Simon Doonan (via FishbowlNY): 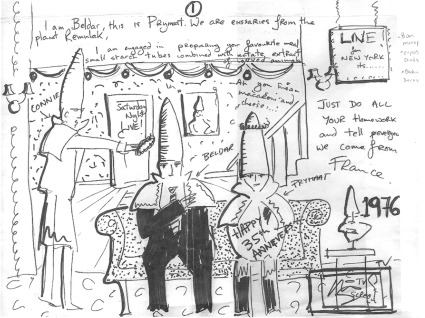