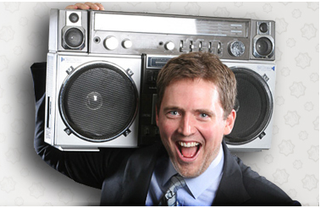 So you're an aspiring stand-up comedian. Perhaps you're thinking you could further your career by getting a company to fund an online series for you. Or maybe you could hook up with a celebrity. Or, wait, what if a celebrity went on tour with you? All of those would work, and being on two network TV shows in one week would give you exposure, too. Owen Benjamin didn't plan any of those things, but all of those things have happened to him in the past couple of years. I know. Crazy. But true. He's in New York City this weekend (co-headlining with Matt Braunger at Comix), and I caught up with him for some brief Q-and-A action.

But first. Here's a clip of him from Monday's segment on The Jay Leno Show:

I loved your custom jingle sketch on Leno — thought it was one of the best of the correspondent pieces so far. Will that be a recurring sketch for you, or will you be mixing it up with different types of musical comedy?

"We've shot two of those. The next one is Oct. 12. I'm really
pumped about the second one. We change it up and write jingles to
random people."

"They guide everything but they give us a lot of freedom. That's Leno's
thing is he wants to let good young comics do what they want. Luckily
the Leno crew's experience and knowledge comes in handy when it comes
to editing, writing, and production. They're really good at what they
do. They help write but give us a lot of room. Especially my bit, because by definition it all has to be improv."

And how much did your previous experience in short videos help you with your first Leno bit? (From my viewpoint, it seems as though the quality of the taped pieces has been all over the map from great to not-so)

"The stuff I did for Crackle.com is so valuable to me experience-wise. I've shot, directed, edited, and scored so many shorts that when I'm
working with other people I understand their job and I can help make
it easier for them."

Related: Here's some more background from Owen Benjamin on working with Leno. You've also had various experiences in comedy that not many other comedians can boast of doing (or surviving), so I'd like to find out what you've learned from them.

"Oh man, I've opened for Julio Iglesias, worked as a heckler at a Renaissance Faire, sung in operas as a kid, played the piano since I was 2, starred in a movie, done open mics to theatres, you name it. It
all comes in handy from time to time."

For instance. I'm not sure how many people know or recall that you toured comedy clubs in 2008 headlining with Jimmy Fallon as an often-unannounced special guest. I know Lorne Michaels wanted to get Fallon out on tour to prep him for his Late Night show. What did you learn from watching him on the road? Did you also perform with him onstage?

"That was an awesome experience. We learned from each other. At first
he learned from me because I had been doing so much stand up and he
had been acting and on SNL for so many years. I helped get him
comfortable with it again. But I learned a ton from him about how to
deliver a joke, how to treat people, etc. He's an amazing performer
and an amazing joke writer. That experience was incredible. We did a
few duets on stage which was insanely fun and exciting. and he also
really liked my dog, Benny, which is a huge plus in my book."

And here's a clip of Owen Benjamin performing on Wednesday night on Late Night with Jimmy Fallon:

You've also had to deal with the paparazzi. That's something only a very few stand-up comedians have ever had to deal with, and why would they? What was it like when that brush with the paps first started, and how did you deal with it? Did your comedy chops come into play? Did you look at any of the tabloids or gossip sites to see how they were portraying you? Do you have any advice for those of us who may someday become famous, in terms of dealing with privacy issues and the paps? (See my earlier post on when leading ladies fall for stand-up comedians)

"Yeah, it was pretty easy to deal with. I think my comedy background
helped a lot because I could brush it off as funny. The Enquirer once
wrote "Christina Ricci dates Big Foot" and I laughed out loud. I think
if I was a sensitive-actor type I would have been pissed. One time
they took a picture of me reading an illustrated version of "Twilight"
at Borders. That ended up in US Weekly and I had to convince my
friends for a few weeks that I wasn't gay."

You've also had experience working in new media with folks such as Sony's Crackle and CBS. Was that something you pursued as a way to get your comedic voice out there? Or was it something you had to be talked into? What were the pros and cons of having a series that's online-only? Do you have any advice for comedians who think that the Internet is their gateway to moving up in show business?

"Loved it. Highly recommend the experience. It's like getting paid to go
to film school. Sony Crackle team are such great people. Internet
series are a great way to get out off beat story lines that wouldn't
be able to make it through the hoops of network television. For
example, my series Gaytown about being a closet straight man in a gay
world is very funny to me but not likely to get on ABC or FOX. CBS was
a great experience too (read about Heckle U here). Good peeps over there as well."

And finally, there's the music. When I first saw you in Aspen a few years ago (has it been that long since we took down Aspen?), you were doing straight stand-up. Did you not have music in your act then? If not, when did you incorporate it into the act? I've heard other people (Mike Birbiglia among them) talk about how it can be complicated bringing a guitar or other music onstage at the end of an act, and I certainly have heard comedians debate the merits of musical comedians versus stand-ups. How do you feel about it?

"At the time you saw me in Aspen, I was still working on being a stand
up. I wanted to be able to stand alone as a comic, not a musical comic, and I wasn't quite there yet. Once I realized I could kill a 45-minute
set without a piano, I then started using one so that I knew in my
heart it wasn't just a crutch. I'm not gonna lie I'm pretty sick at
the piano. I played 6 hours a day my whole childhood. It would have
been very easy to hide behind that and never develop as a comic. I'm
glad I waited. But it's really fun to close with it. The crowd kind of
looks at you and thinks, "Holy shit.'"

So You Want to Win a Comedy Contest? Life lessons from six stand-up champions