The inaugural Friars Club Film Festival kicked off Thursday night with the U.S. premiere of the latest film by Joel and Ethan Coen, A Serious Man. 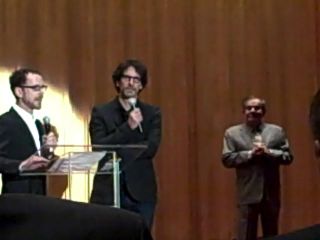 Friars Club Dean Freddie Roman introduced the Coens at the red-carpet screening inside the Ziegfield, calling them "two Jewish boys who grew up in a hotbed of Judaism" in Minnesota. "In their synagogue, the cantor was Norwegian." Zing. And, well, A Serious Man is a seriously Jewish dark comedy. Seriously. Michael Stuhlbarg plays Larry Gopnik, a college professor who finds his life unravel around him and turns to his rabbis for answers. His son attends a Hebrew school and has to prepare for his Bar Mitzvah. One of his neighbors may be a rabid anti-Semite; another is very hot and tempting. I neither grew up Jewish nor in the 1960s nor in Minnesota (wherein this film is set), but I still laughed out loud several times. Richard Kind plays Gopnik's brother, who has a problematic cyst, as well as other more pressing problems that are played for comic relief. Oh, and there's an opening sequence involving ancient Polish Jews and a guy who may be a ghost? It may not all make sense, but I suspect that's part of the point. Aaron Wolf, the boy who plays young Danny Gopnik, told me he wasn't exactly sure what to make of it, either. Roll a clip!

There was a fun afterparty at the Friars Club. Among those in attendance: The Coens and many of the cast, Frances McDormand, Jeff Goldblum, Robert Wuhl, Tom Cavanagh, Allan Havey, Vincent Pastore, Samm Levine, Jonathan Ames and Fiona Apple.

The Friars Club Film Festival continues today through Sunday with shorts, feature films and documentaries, as well as a series of panel discussions that include members of the Friars Club and the Upright Citizens Brigade Theatre.

And that's not all. Friars Club members told me last night that they also plan to launch a new weekly live comedy series at the club on Tuesday nights. More word on this when I get it!