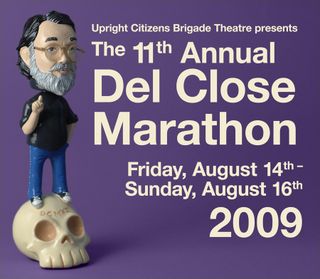 All good staycations must come to an end, or ultimately be replaced by another staycation, which is how and why several hundred people are expected to spend this weekend where? In the basement underneath a grocery store in the Chelsea neighborhood of New York City, sweating in cramped quarters with limited to no wireless access, laughing uproariously day and night as the Upright Citizens Brigade hosts the 11th Del Close Marathon.

What's the best way to enjoy the DCM? Everyone has a theory. Keith Huang, noted lover and photographer of improvised comedy in NYC, asked several comedians for their tips (some gave funny answers, some answered sincerely). Sharilyn Johnson, who blogs about comedy from Toronto, makes the trip and has provided some advance coverage this time around. The Onion's Decider page tried to map out one potential itinerary for you, too. Although, of course, that battle plan fails to take into consideration the very real threat that one Rob Riggle will not be attending any of the shows he's scheduled to be in. Wha? Riggle wrote on his Twitter feed on Aug. 12 that he would miss DCM11 because he's filming a new movie. "Only missed two before; both because of war. Now, filming a movie." Riggle did manage to find the time this week, however, to fly to Las Vegas and back to attend a red-carpet premiere of another movie he's in, The Goods. And as Paul Scheer replied via Twitter: "stop being a pussy get on a train and come down from Boston for the weekend." As someone who has made the NYC-Boston roundtrip many times, I can verify that it is more than possible. So you'll have to keep that in mind, since online, the DCM11 schedule has not been changed to reflect Riggle's absence.

As for my own tips? Hmmm. I'm still trying to find the best way to enjoy the DCM myself. In 2007 and 2008, I tended to manage my schedule around the lines outside and the need to see the big-name shows. This year, I'm definitely going to try to spread out a bit and experience more of the festival — with trips to the satellite stages at the Hudson Guild and Urban Stages, and take in more of the out-of-town groups. But it's no secret that the guaranteed winners — in terms of laughs, surprises, potential celebrity appearances and moments you'll want to share with your friends — happen in the UCB basement after midnight.

A bracelet will set you back $25 for the weekend. Shows at the F.I.T. cost extra ($12 each) and are sold separately. This year, you also have more opportunities to share in the fun even if you're not there. They've set up a DCM Photo Tumblr so you can see what you're missing, and contribute your own snapshots. On Twitter, take part in the running conversation via the hashtag #dcm11. You also may see some footage show up on the UCB Comedy site later on, as they have their own people filming parts of the marathon. And I'll be there, too. So please say hi and remind me to take lots of notes and put them onto the Internets for you!