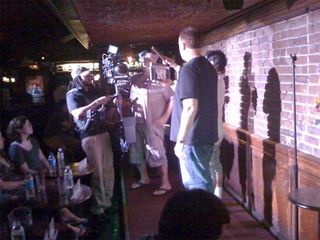 We have a lot of catching up to do. First, let's share this news with you about Louis CK, who in addition to recording plenty of "Hilarious" stand-up for a new CD in March and following that up by filming his set for a new DVD, has a potential stand-up comedy/sitcom hybrid that he's working on for cable network FX.

Here's what Louis CK had to say about it to the AST message board: "I'm doing a pilot for FX. It's autobiographical. I do some standup on the show and some of it is in narrative film form and some of it gets weird. It's kind of hard to describe. It doesn't follow the pattern of any show I've seen. It's not like Seinfeld or Pulp Comics. I really hope it gets picked up because I'm getting to direct in New York again with my little independent film crew that I started with and if I could just keep doing that, and using my standup in this way, I'd be a very happy idiot." The pilot shooting also has included roles for Todd Barry, Nick DiPaolo and Rick Shapiro, and he should know more about whether FX will pick it up in a matter of weeks.

Matt Ruby over at Sandpaper Suit (who took the pic here) was at the taping Wednesday at the Comedy Cellar and filed a report, while Videogum's Gabe expressed his feelings about the adventure at greater length.

Want to know what the fuss is about? You can see Louis CK live in NYC at the end of July at Carolines, just after his latest stops at Just For Laughs fests in Toronto and Montreal.

Shoot the Messenger visits the 2008 RNC

After 17 years, Brian McCann and his characters exit Team Coco