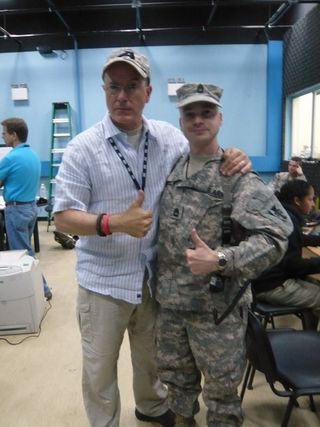 Sometimes you find your life as a stand-up and sketch comedian in New York City interrupted when your other life as a soldier in the U.S. Army orders you to report for duty, and you find yourself sent to Baghdad, Iraq for the better part of a year. Puts a crimp in the comedy. Until Stephen Colbert shows up to tape a week's worth of shows with and for the troops.

"Five years in New York and I had to go all the way to Iraq to make it into Colbert's writers' room." — Sgt. First Class Benari Poulten

As he wrote when he added this photo of himself with Colbert on his Facebook page on Monday: Mission Accomplished. We've already introduced you to Sgt. First Class Benari Poulten, who has been serving in Iraq with the Army's communications office. Which put him in a perfect spot for connecting with Comedy Central's crew from The Colbert Report. Poulten wrote to me this afternoon:

"I got to hang out with him and his writers and staff in the production/writers' room for a day and half. And see the rehearsals and the first two tapings. Awesome guy. And the writers were all cool – I was afraid that once we established the whole New York comedy scene connection, they'd be like, 'Aw, no, get this dude outta here!' But they were amazingly cool and friendly and we talked about all the folks we knew in common and comedy and New York…good times. I even got to act as a kind of impromptu military advisor – AND I got to throw in a few suggestions. Not bad for war. 5 years in New York and I had to go all the way to Iraq to make it into Colbert's writers' room.

"The troops loved the show – it was huge. Colbert was very respectful and genuinely supportive of the troops, but he didn't water anything down. He even managed to pull in huge laughs on a very political 'Formidable Opponent' piece about Don't Ask, Don't Tell. Most impressive."