I should have known when I got off of the L train and walked down a lonely road of abandoned garages and warehouses sandwiched between duplex and triplex apartments, that Cirque du Quoi?!? would not be just another sketch comedy show. It certainly made me say "quoi?" but where was this cirque, exactly? And are we in East Williamsburg, or Bushwick? Didn't matter. For the record, I think East Williamsburg was and is the home for Lady Circus, a group of female burlesque acrobats who work out of a garage space high-ceilinged "palace" called The House of Yes — and for the past three weekends, ending Saturday, have been collaborating with raunchy sketch comedy group FUCT for this Circus of What. 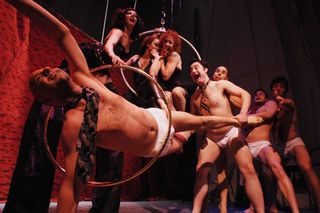 Yes, FUCT. It stands for Fordham Underground Comedy Troupe, but just as well should stand for what you're thinking phonetically, because these guys (and one gal) specialize in bawdy adult humor. They love pushing boundaries, and even making audiences feel skittish. Co-founder Jon Crane told me that when FUCT performed a sketch at a festival in Chicago, an audience member wrote a letter complaining that they should have been warned "about all of the homosexual content" after seeing their sketch on "How to Kiss A Girl." FUCT used this as a source of more humor. It's as if the boys from Jackass decided to form a sketch troupe. Just check out their Wheel of Torture, for example.

But what if they ran away and joined a burlesque circus? It's a match made in Bushwick. "This is the most commercially viable thing we've done," Crane told me. After a series of black-box and outdoor productions, spending three weekends in a garage with beautiful women, performing acrobatic circus antics while showing plenty of skin (full male and female nudity is part of the show) does seem like something more than a few people would want to experience in person. The ladies from the circus certainly know their way around a trapeze, rings and silk sheets that hang from the ceiling. But the fellas have learned a few tricks or two themselves. Over the course of two hours and 17 sketches, FUCT and Lady Circus perform several routines as mimed instrumentals, dance, strip, juggle, walk on stilts, and have plenty of sex on their brains. It's not Cirque du Soleil. It's Cirque du Quoi?!? Exactly.