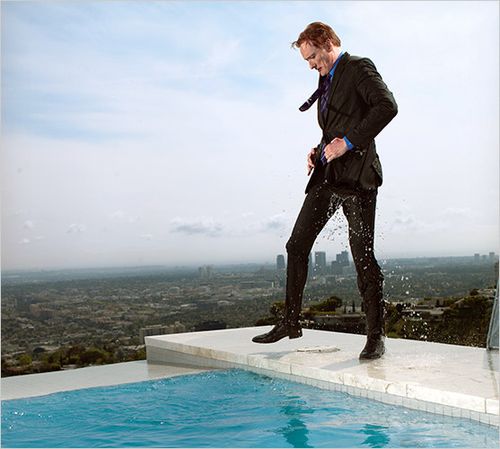 This coming Sunday's New York Times Magazine profiles Conan O'Brien, and is as much about the changes in late-night TV coming this summer and fall, as it is about O'Brien himself. Some great quotes. Such as this tidbit, in which O'Brien talked about how, earlier this year, he'd tape two Late Nights on Thursdays so he could spend his Fridays building his relationships with various NBC affiliates around the country:

‚ÄúI felt like Lyndon Johnson in the hill country, running a grass-roots campaign,‚Äù O‚ÄôBrien said. ‚ÄúIn places like Oklahoma City, everyone was wearing Conan wigs and they brought a Clydesdale out of a truck. I grabbed a cowboy hat and rode in circles in front of the station. There were cheerleaders doing cheers for me and banners with my name on them. I kept thinking, I came into show business through the back door of SNL and The Simpsons, and now I‚Äôm in the carnival. Which I love. If you want to host The Tonight Show, you need to go to Kansas City and Cleveland and Milwaukee and San Jose and Oklahoma City. There‚Äôs something about the show that does belong to those people.‚Äù

(photo by Dewey Nicks for the NYT)

This is what Jeff Zucker saw last night. Even he couldn’t avoid Conan’s debut!