Most comedy clubs take pride in having a stand-up decide to record his or her latest CD/DVD special at their establishments. Besides being listed in the liner notes, the club also can use this as a bragging point to attract both audiences and comedy acts alike. 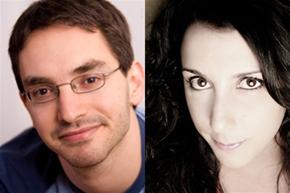 But what if a comedy club decided to get into the business of recording and producing stand-up albums? That's exactly what Comix in New York City began doing earlier this year with its Live on Tape series. Usually recorded in pairs, the club will play host to recordings tonight for up-and-coming comics Myq Kaplan and Giulia Rozzi.

They already have recorded live sessions with Ophira Eisenberg, Vanessa Hollingshead, Craig Baldo, Sean Patton, Darryl Lenox and Matt McCarthy. Though none of the previous six sets are out yet, they will be soon, and will be released on Apple's iTunes and other applicable digital marketplaces.

I saw the Lenox and McCarthy tapings last month. The audience seemed divided equally among those who came specifically for one or the other comedian, and despite the two bringing completely different vibes and comedic approaches to the stage, they both killed it.

Brian Baldinger, Comix's current booker and director of talent development, said the club takes advantage of its own high-quality equipment to record the 45-to-60-minute sets, and then sends out the recordings to BSeen Media down in Suwanee, Georgia, where they then edit and master the production, and divides it into individual tracks that can be monetized, as it were. "We collaborate with the artists on artwork," Baldinger said. And when the comedian approves the final tracks, "BSeen markets the work on iTunes and all of the similar sites that are out there, and then there is profit-sharing for all three parties."

BSeen already has a track record, so to speak, of working with comedians such as Tom Papa, Tom Shillue, Mitch Fatel and Phil Mazo on recording, producing and marketing their own stand-up CDs. "They have a history of selling tracks for people who are known and unknown," Baldinger said, "so we're giving it a whirl. We're still in the post process on the first pair of albums that we did in the series, so we don't know what the results are yet."

It's no cost at all for the comedian, outside of getting an audience to show up for the live taping — unless he or she wishes to make physical copies of the CDs and/or DVDs to sell on the road.

How do you decide who gets to tape with Comix? "It's comics whose material I love, who I think deserve a shot, and who have the time, have the 45 minutes and who fit with our brand," Baldinger said. "We haven't figured out all of the branding stuff yet. But I want to be proud of them for being on our, for lack of a better word, label. Even if they don't have a national name, they have enough that we can get that night going."

Are you getting bombarded with taping requests from comedians yet? "I think we're still flying a little under the radar right now. I think we'll have to get the finished product, where people are buying it in the marketplace, before people figure out what's going on." Baldinger is fine with being under the radar for now. "Less politics in it that way."

As “Cristela” wrapped season one on ABC, Cristela Alonzo’s message to fans

Voices on the vices of the late Greg Giraldo (and a reminder: buy tickets for his all-star benefit show!)

Win $10,000 for your short film: The Friars Club can make it happen for your sketch or improv team