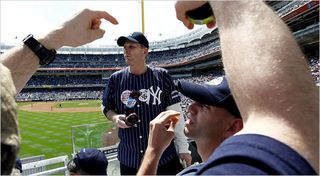 You'd seem to think so, as this story in Sunday's New York Times literally goes to the left-field seats at new Yankee Stadium to interview a beer vendor there, 51-year-old Steve Lazarus, who has been telling jokes on the job (and also in suburban comedy rooms in New York, New Jersey and Pennsylvania).

Of course, the NYT does sometimes follow comedians around the Big Apple for a night out on the town feature. But it'd also be nice to see a stand-up get profiled for the right reason: That he/she is funny and needs worldwide exposure.

Fun facts? Hiring employees to serve and entertain at the same time is not a novel concept, either. Plenty of theme restaurants, and theme parks, expect their workers to be able to entertain their guests. When I worked at the Space Needle in Seattle for several months in 1998, the folks at Seattle Center specifically were looking for comedians to enhance the experience for Space Needle visitors who would wait in long lines to ride up and down the elevators. They hired me and several members from TheatreSports. My job interview/audition even aired on NPR.

One thought on “Does a comedian need to have an out-of-left-field hook to get profiled by the New York Times?”