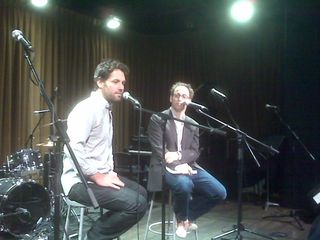 When you throw a party for a TV show, much less a Web series, you're never quite sure how it will translate as a live experience for audiences to sit and enjoy. No such worries last night at the 92YTribeca, which hosted "Wainy Days Live," a party that not only marked the start of the fourth season for David Wain's amusing ode to seeking love and finding plenty of sex jokes along the way, but also the relaunch of a newly designed My Damn Channel, which made Wainy Days possible.

Rob Barnett, head of the small, plucky crew at My Damn Channel, told the audience at the start: "My Damn Channel is a brand-new thing today." The redesigned site features a larger player and a cleaner design. Barnett told me that his strategy all along has been to focus on a small group of talented performers and give them free reign to do what they do. That's how My Damn Channel can stand out from the many other players in Web comedy. He told me that Sam Seder's "Pilot Season" had gotten two million views in its first two weeks as a reborn Web series. So far, so good.

David Wain kept the live show moving at a nice pace last night. In between video clips of this week's latest episode (Amanda Peet has a curious fetish in #27, "Jill") and a snippet from #28 that features Lake Bell — Wain warned before screening it, "If it shows up on YouTube, I will kill you!" — he treated the crowd to several musical performances from Wainy Days (Wain has skills both on the drums and piano), readings and an anti-chat.

Leo Allen and Callie Thorne re-enacted their performances from Episode #4: Cyrano d'Bluetooth, with Joe Lo Truglio playing Wain's part. Live, the pacing was a bit slower and the reactions a bit more animated. But still quite amusing and over-the-top NSFW. Amy Miles sang selections from an upcoming "two-part epic rock opera" that may not be epic, but certainly provided reason enough to bring Paul Rudd onstage. The crowd also got a sort-of Stella reunion when Michael Ian Black and Michael Showalter arrived to perform a sketch the Michaels claim Comedy Central does not want them to produce for their upcoming series, Michael and Michael Have Issues. Though for the life of me, I could not see what could be so wrong about having "extra farts" with dinner. "Can you believe it? They don't want us to do that one," Ian Black said. "But we're going to tell them that the f—ers at 92YTribeca f—ing loved it!" Wain got most of the actors from Wainy Days, plus Thorne and Rudd, to stage a reading of what Wain claimed was his first draft of the series, written when he was 12 (but most likely last week). Let's just say that even as a middle-schooler, he was preoccupied with sex. Best offensively funny line: "That's cool. What's the point of Roe v. Wade if we're not going to use it?" The "Stella" trio also got the audience to indulge them in their own spin on Mad-Libs. And he topped off the evening with an anti-chat segment with Rudd (sample topics: How much fun must it be on a Judd Apatow set? And the cast of Friends really are friends!).

Videos after the jump:

And here is the most recent episode of Wainy Days:

Garfunkel and Oates on HBO Digitals: In five easy pieces