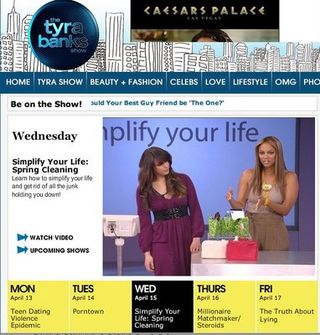 You may have missed yesterday's edition of The Tyra Banks Show, because, let's face it, you have much better things to do with your day. So to catch you up, Tyra tackled spring cleaning, and if you know anything about her show, you know that she likes to sometimes find comedians to take part in her ruses, only said comedians don't know all of the rules to the ruse, and then they find out the ruse is on them! One of yesterday's stars was musical comedian Jessy Delfino, who apparently keeps too much in her handbag. Tyra would show her. Here's a little bit of how Delfino felt about it:

I was invited to be a "guest" on the show but they sat me in the AUDIENCE like some kind of commoner. (ha ha). Tyra "scoped the audience for someone with a big purse", "found me", brought me up onto the stage and then she dumped my purse out. I knew they were going to do that in advance, so I packed it with all kinds of ridiculous goodies, including my beautiful flying V uke and my keyboard and other stuff. I thought the segment looked really ridiculous but hopefully they'll "fix it in post" as they "say in the biz". (But seriously, they really did say that to me. I said, "Do you think this segment is going to come out okay? And Jessica, the segment producer, actually said, "Don't worry! They'll fix it in post!") (For those of you who know my circle of peeps, that doubles as a shout out to Jason Tburg who constantly dishes that old line!)

For more of a taste of the real Jessica Delfino, you can check out her new series on Funny or Die, Jessica's Chest. Or watch and listen to this tune she wrote about her way to fix the economy. Is it 4/20 yet?

Jimmy Fallon piggybacks on Bill Cosby, literally and figuratively, with an impersonation of him