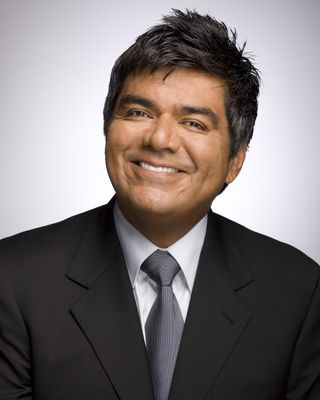 Hours after TBS announced it'd give George Lopez the "Very Funny" network's 11 p.m. hour on Monday-Thursday nights come November 2009, Lopez himself took to the phones for his first conference call as a would-be talk show host. What have we learned already? For one thing, Lopez certainly isn't intimidated, nervous or daunted by the challenge of helming his own late-night chat show.

Lopez said over multiple appearances on The Ellen DeGeneres Show, executive producer Jim Paratore had asked if he'd ever consider doing his own show once his ABC sitcom ended. That's done now. "I'm out of the sitcom business," Lopez said today. "I love the fact that I never thought I'd get a sitcom, nor did I think I'd make it in syndication…It's all been unexpected…I've exceeded my own expectations."

As for late night's Lopez? "I'm not sure you can reinvent the late night talk show, but you can paint with different colors, and obviously we're going to paint with more brown and taupe and mauve." Mauve? "I believe there's an audience out there that's not being serviced," Lopez said. And much like President Barack Obama's campaign — which Lopez supported, and which he noted, the president even offered some help in his TBS pilot presentation — the stand-up comedian says the people who supported Obama could also turn out in droves to see a different kind of late-night program. "Seeing that inspires you to know all of those people have TVs," he said.

Lopez said his experiences growing up watching Dick Cavett and Mike Douglas, then performing as a younger stand-up on Johnny Carson, Arsenio Hall, David Letterman and Jay Leno — all of that, in a way has prepared him for his next challenge. "We're in a position now where, it was tough to have a Latino guy cross over," he said. "I have that luxury, where it's become one word, GeorgeLopez, not just George..I'm not afraid of a challenge. I'm not afraid of having a camera on me."

For his pilot production show, Lopez said they had an audience surrounding him by about 240 degrees on the street set from "ER," with guests including Samuel L. Jackson, Eva Longoria, Kaley Cuoco, Dane Cook and Shakira's band backing him. He wants to keep things loose, saying he doesn't want to have note cards on his desk — if he has done his homework, that should suffice. "I don't want to read what's coming next," he said. That audience interaction also plays into it. "I let the audience ask, like, three questions" for Longoria, he noted. "We didn't screen the questions, either." He may even do some interviews from within the audience, wanting to keep things fun. "I don't want them to heckle, but I don't want them to feel like they're not part of it," he said.

When someone asked about guests he'd love to have on, Lopez didn't skip a beat with a choice that hit close. "I'd love to have Michael Jackson on, because he's black and white. He would appeal to a universal demographic," Lopez said, then acknowledged: "I testified in his trial…because I was (Jackson's accuser) coach in a comedy camp at The Laugh Factory." Also, he'd love to introduce Mana to a wider audience. "I'm a huge fan of Mana," he said. "They're like U2, that politically relevant and socially relevant, and I can't think of when I've seen them last on mainstream television."

Lopez hits this theme hard, saying that Telenovelas are more watched than shows such as How I Met Your Mother, and arguing "there's an audience beyond The Hills and Gossip Girl."

He tactfully avoided giving any opinion on Jimmy Fallon's entry earlier this month into Late Night, and said he hasn't even watched Fallon's show yet. "I didn't want to be influenced by what he was doing," Lopez said of Fallon. "I know it's a difficult job to do and I didn't want to either have an opinion or give an opinion because it's difficult either way, stepping into Conan O'Brien's shoes."

But Lopez promises his show will be different, and not just because it'll be on cable. Although he did say that TBS executives have given him permission already to use whatever language he prefers (and I'm not talking about Spanish). "I think that may come back to bite him in the ass," Lopez said. He likes not having to worry about censor bleeps. "I'd rather have that bullet in my gun than not have it. I'm sure a motherf@#$er will slip out now or then." And his monologues may offend some people, whether he writes them himself or uses a team of writers. "I'm not going to say something that I wouldn't say," he said. "It's got to be organic to me. The edgier the better. I'm not afraid to take on something or somebody. You can't say anything good without being offensive."

Lopez also continues to tour with his stand-up, which he did long before making it into prime-time with ABC. He knows that some of his TV fans have been surprised by his "edgier" stand-up. "I didn't like when kids came, because they thought they were seeing the Nick At Nite George Lopez," he said. He now has warning signs put up at tour stops, and also has children removed from the room and given merchandise instead of an adult comedy routine. He'll do a live HBO special in August from San Antonio, Texas, then come up to NYC to perform at Radio City Music Hall, then take a break from the road to get his TV show off the ground.

He hopes to take a page out of the playbooks of Arsenio Hall and Ellen DeGeneres to make his own show a success.

"At that hour, after long days, I'd just like it to be funny…bring out the best in (guests)," he said. "I don't want it to be heavy, because that's what Anderson Cooper is for, that's what Lou Dobbs is for."

"What appeals to me, more, I love the energy of Ellen's audience from the time they get in" hours beforehand, he said. "I had a meeting and they had her show on, and the sound off, but the people looked they were having a great time." He remembered watching a live taping of Arsenio's show and seeing a similar energy. "I don't think I've ever stood on a stage where there was as much excitement. That audience went to him in droves."

But don't try to get him to name his own Dogg Pound or come up with his own dance routine just yet. I asked. And as he politely reminded all of us: "It gives me months to think about. I'll find it. I'll find it. This is my first day to talk about it. I'd hate to set anything in stone right now."

Cedric The Entertainer steps down from hosting Who Wants to Be a Millionaire to focus on other TV, film projects