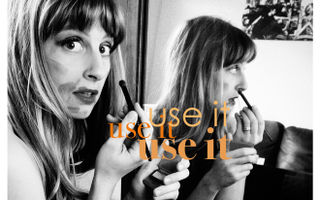 Ann Carr doesn't simply create characters, she jumps into them so fully that you wonder where Carr went. I often want to tell anyone who likes Showtime's new comedy United States of Tara that if they really want to see how one person can inhabit so many different personalities and leap from one to another at will, then they should take a closer look at Ann Carr. She is truly captivating.

Carr's many creations have come out to play before, in shows such as "The Winner's Circle" and "There is Only One You." In "Use It," her new one-woman show directed by Eliza Skinner that's making a run at the UCB Theatre in New York, Carr takes on some of the characters she has crossed paths with in her own real-life struggle to make it in show business. There's a male coworker who makes awkward small talk. There's the college classmate who went on fame and fortune, bumping into Carr as she works as a waitress. "She's so jealous!" the actress says of Carr, adding another level of self-absorption with this chestnut: "This is your struggle, and I'm part of it…Use it!" There's a mother accompanying her son on an audition. There's a scene losing it in public at a Starbucks. At one point, one of Carr's characters wonders: "I keep doing it because I know it's not all bullshit, right?" Not if you use it. Use it and turn it into something you can control. It's not all played for laughs. But you won't want to look away, either. She is a delight to behold, in all of her wondrous characters.

Go: Ann Carr's "Use It" at the Upright Citizens Brigade Theatre in New York City.

See more: This is not part of the show, but Ann Carr's most recent video is after the jump.

The Walsh Brothers prepare for Aspen