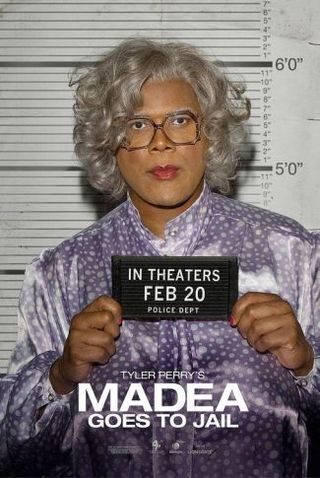 You might think a movie called Tyler Perry's Madea Goes to Jail, featuring posters of Madea going to jail and a trailer focusing on Madea going to jail, would actually revolve around this central plot point. Of course, fans of Perry's work probably have not been so surprised (well, maybe just a little, but in that Charlie Brown getting the football pulled away from him by Lucy way) to see the film is really more about serious matters and sermonizing and learning a life lesson or two by helping a prostitute. UPDATE: Perry was the only one laughing all of the way to the bank when the movie took in $41 million in its opening weekend.

TBS is celebrating this occasion with a 24-hour marathon, starting at 8 p.m. tonight, of Tyler Perry's House of Payne, Tyler Perry's Meet the Browns, and two airings of Diary of a Black Mad Woman.

I already have watched the first 10 episodes of Meet the Browns, to spare you from the heartbreak you'll certainly feel while wondering where the "comedy" is in this situational comedy. Among the topics they ha-ha about: Post-traumatic stress disorder, suicide, adultery, homophobia. Brown jokes about Madea being a man, even though he had sex with her, since Cora is his daughter, although in real life, they are married. Now this is a show with daddy issues. Also, Brown is religious, but never heard of Jesus as a Hispanic name before? He's also dumb enough to say the word "bomb" in a hospital. He's supposed to be running an elderly center, but the residents include two kids and a wealthy diva?! And yet…Meet the Browns premiered in January with 4.2 million viewers, and in its first month, averaged 3.4 million viewers. TBS has ordered 80 more episodes, which will begin airing this summer. More people have watched it than Bravo's Top Chef, which airs in the same 10 p.m. Wednesday time slot. But while everyone in pop culture blogs about what happens in that hour's episodes Top Chef and ABC's Lost, hardly anyone talks about Meet the Browns.

I think it's because, well, where do you begin? Tyler Perry's view of comedy seems to have been shaped largely from watching only the "very special episodes" of 1970s and 1980s sitcoms. For those of you who need a refresher, think of the episode of Diff'rent Strokes when Arnold (Gary Coleman) becomes the target of a pedophile. Or when Maude got an abortion. Or M*A*S*H, and especially the episodes in which Hawkeye (Alan Alda) spends the entire half-hour with his therapist. You know. The unfunny shows. A moment or two of slapstick surrounded by a whole lot of sermonizing.

Tyler Perry revealed quite a bit in a lengthy interview published this week by The Hollywood Reporter. Let's go through it and share the revelations. Emphasized text in bold.

On his filmmaking style: "My stories are usually pretty predictable. The
dialogue is always very simple because I am very aware of who I am
speaking to. My audience is from 2- and 3-year-olds all the way up
to 90, so I'm not trying to tell any extremely stylistic, artistic
stories." No, really. Some of these productions might be better if you are 3 or 90.

On why his audience had been ignored before Perry came along: "For the most part people speak from their own
experiences, and in Hollywood, there have not been a lot of
African-Americans who have been able to tell their stories
unfiltered, unedited, with no notes, and bring (them) directly to
the people. That's why I love my relationship with Lionsgate: It's
a no-note, we-don't-show-up-to-the-set relationship. I bring them a
finished film and we test it and it usually does extremely well." I'm not going to defend the studio's right to deliver notes, because certainly executives might not always know what's funny. But I get the sense that there is nobody in Perry's world who gives him critical feedback. He doesn't even screen his movies for film critics. Why bother, he must think to himself, as long as the audiences show up over and over? As for the topic of race, I think it's more of a numbers game…as in the number of choices black audiences have to see a comedy, or even a dramedy, on the big screen each year. Look at the 2008 slate of feature films, and you'll find dozens of comedies — from funny to goofy to moronic — featuring mostly white casts. For the black community? Only a few. And Perry's Meet the Browns last year still got beat at the box office by Martin Lawrence's Welcome Home Roscoe Jenkins.

But here is the real key. Perry on who his audience is: "It's about 50% Christian churchgoing. It depends on
what part of the country I'm in. If I'm in the Bible Belt it's 90%
churchgoing. If I'm up north in Newark it may be 30%, so it depends
on where you are. I used to adjust the shows to where I am. If I
was in the Bible Belt I made it more Christian, God-themed. If I
was up north I could get away with saying "ass" a little more. I
would say 75%-80% women, 10%-20% men and about 5% children. What
I've learned is you treat the women right and they bring everybody
else." Christian women. And you know what Christian women laugh at? Polite jokes. And slapstick that doesn't get anyone hurt, but teaches kids and men their lessons.

Before I continue, let me also point out that while there is a market for Christian comedy and plenty of stand-ups working that church circuit, there are also more than a few "clean" stand-ups who do not focus on religion, while I dare say the great majority of stand-up comedians openly question all aspects of religion. Because that's what being a comedian is all about, questioning the world around you. Anyhow. Let's continue with Perry's interview.

Perry describes an average day. This is one day: "I'm usually up at about 6 or 7 working out. And then
I get to the studio. We will do a table read in the morning and
block the show, and then I'll leave and let them rehearse it. I'll
go up to the office, I'll do some writing, some working, take
meetings and then come back at 2:30 to shoot the show. The show is
done by 5. If I'm shooting a movie at the same time, I'll leave the
show at 5 and go to the set, or go next door to whatever stage the
movie is on and work until like midnight. I can do that for about
90 days and then I need a long break." And before you think that's something, he follows that up by saying this: "I
need people who don't have the Hollywood mentality, because you
tell people who have worked on sitcoms that we are doing three or
four shows a week, and they go, "Are you crazy?" But you tell a
person who has never done it and they think, "Wow, cool, this is
the way it's done."

Yes. People will call you crazy. Because you don't simply crank out hundreds of episodes of a sitcom and expect them to be funny. Then again, Perry doesn't seem too concerned about making his comedies funny as he is on getting his melodramatic messages out to his audience and building an empire out of it. Actually, that sounds more like a televangelist than a comedian.