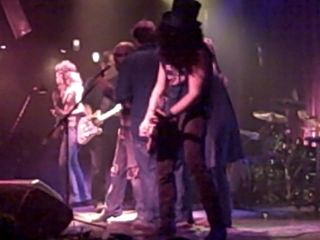 If Eugene Mirman could pull off his own comedy festival, then what would he have in store for the release of his first book, The Will to Whatevs? We had to take the first B75 or F train we could get to the Bell House in Gowanus Brooklyn to find out last night for ourselves (why do I refer to myself in the first-person plural? not relevant). A sold-out crowd watched what turned out to be two hours of comedy and a full set by GnR tribute band Mr. Brownstone, and before you ask, why Mr. Brownstone, note that Eugene's brother joined them on guitar for "Knocking on Heaven's Door," with Eugene and David Cross taking over one of the microphones, and Todd Barry and Cross' girlfriend Amber Tamblyn joining them all onstage.

Of course, it wasn't all rock and roll. After all of that, Sarah Vowell took over the turntable with a more leisurely mix of tunes.

But first, Mirman welcomed the crowd with a multimedia presentation about his new book (related: read my interview with Mirman about The Will to Whatevs). John Hodgman took the stage and immediately apologized for being sick with the cold/flu bug that has circled New York City. Although that's not how Hodgman caught it, as he claimed instead: "I got sick hugging Al Gore last week at the TED conference." If that wasn't odd enough for you, Hodgman talked a bit more about the personalities who show up to talk hot topics at TED each year, and revealed that he once tried stand-up comedy at one of Mirman's shows. "Eugene was nice enought to let me come up and insult his profession, and now he has insulted mine," he said. And now that they're competitors in the book world, Hodgman decided to plug his own book and read from it.

Mirman next had Larry Murphy join him onstage to read from two of the many teenage hotline calls Mirman received when he worked the telephone lines in Boston. Did you know he once saved John Malkovich's life? Neither did I. But it must be true. After all, it's on Wikipedia whenever someone gets around to typing it on there.

Kristen Schaal read from Sean Astin's stirring memoir. But it was her experimental one-woman show, "Inside This Mattress," that really changed the way I think we all look at experimental comedy. Disturbingly funny. Also, there was a non-dance dance with her boyfriend to the Britney Spears hit "Toxic" that, well, I'm still not sure about.

David Cross filled in as a last-minute sub for John Oliver, and made fun of Mirman for charging admission for the book party. Cross apologized in advance: "I only planned a $3 set…I don't want to be faulted at the end of this when I do a Google search about the party." Normally, my next sentence here would be no need to fear, Mr. Cross. But. He'd also have to apologize to the audience for daring to tell a rape joke that involves a vibrator. The crowd got awkwardly silent until one woman could be heard audibly with a one-word retort: "No." Comedy lesson learned, Cross said. "Never even remind people that they might be raped." He dug out of his hole by ribbing the movie, He's Just Not That Into You, which, as comedy fans may know, is based on a book written by one of his friends.

Cross later would interrupt Paul F. Tompkins by crossing the stage (back and forth) to get a drink from the bar. When Tompkins asked why Cross couldn't just drink from the backstage loot, Cross replied: "so I could get something that was not Tecate." Which turned out to be Patron. Tompkins told his VH1 story about Weird Al, then read aloud his letters from London he wrote during his "miserable experience" working on a short-lived FOX TV sketch show in 2004. What sketch show, you ask? I recall it airing in midseason 2005 and also including Mary Lynn Rasjkub, Kelsey Grammer and Lee Mack, who was the lone holdover from the British version of The Sketch Show (did you know Jim Tavare was among the Brits on that show? now you do). And here is a clip, which apparently means the show was a hit in Asia?!

Zach Galifianakis made a point with his joint on HBO’s “Real Time with Bill Maher,” unlike other toker jokers