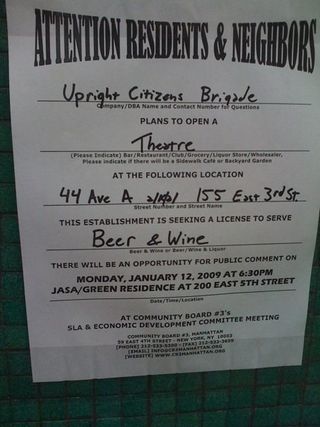 It looks as though the Upright Citizens Brigade may not have to hear complaints from Gristedes much longer, as this public notice reveals the UCB plans to move expand its New York City operations out of Chelsea and into the Avenue A basement home formerly occupied by the Two Boots Pioneer Theater. A public hearing is scheduled for Jan. 12 for the UCB's beer and wine license at the new joint (coincidentally, the Manhattan Community Board #3 also will hear from a request by Eastville Comedy Club that night). The Pioneer was a 99-seat independent cinema run by the Two Boots pizzeria people, not much more than half a block north of the now-shuttered Mo Pitkin's.

Anyone who wants to already wax nostalgic about the UCB's current home should remember that it's not the original home — the UCB has been holding court beneath Gristedes on West 26th Street since 2003 — that several of the seats have needed to be replaced for years, and that the place emits a certain stink in the packed hot humidity of the Del Close Marathon.

So how do you feel about this move EXPANSION? Updated/clarification! The Internets work fast, as commenters already telling me that the UCB plans to expand into Avenue and keep its Chelsea post!? Wowzers. So now how do you feel? Excited? Very excited? Super excited? Yes…and…

UPDATED! (5 p.m. Friday) The UCB just sent out a mass email about this very topic. It reads, in part:

The Theatre is
hoping to move into the Pioneer Theatre at Avenue A and 3rd Street, next to Two Boots Pizza.  While we're still
a long way from making this happen the first step is to see if we can get enough support from within the community.
To continue offering the same brand of comedy at the same affordable prices we'll need to get a Beer/Wine license.

If you or anyone you know live within Community Board 3 (the area of NYC from the East River westward to 4th Avenue, and from 14th Street down to the Brooklyn Bridge) and support this effort please take
a moment and sign the online petition, or
stop by Two Boots this weekend and sign a live petition. If you do not live in the neighborhood, we appreciate your
support but it will not be helpful to us for you to sign the petition.

Why is The Awl so ignorant about comedy?

Katt Williams tells CNN, no apologies: “As a stand-up, the only thing I sell is uncensored thought.”

6 thoughts on “Upright Citizens Brigade: Moving from Chelsea to Avenue A?”