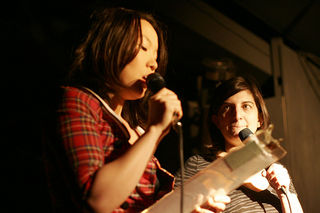 By almost any indication, the 50 First Jokes show on Saturday night was a rousing success. A packed lounge at Webster Hall. An advance write-up in the New York Times. In just one of the four groups, we heard Jesse Popp reveal some of Mayor Bloomberg's new laws taking hold in 2009 ("no sweets before dinner" and neighborhood "swear jars," among them). Carolyn Castiglia announced her impending divorce to introduce a joke. Diana Saez followed that up by announcing she was newly pregnant with twins. And Seth Herzog joked about finding out he was the father of her kids at a comedy show (that last bit is just a bit). As Jackie Kashian said, "I live in Los Angeles, where this would never f—ing happen!" Laughs abounded. Organizing comedians Jiwon Lee and Claudia Cogan (pictured by Maryanne Ventrice, click here for her complete slideshow!) should be commended and applauded.

That said, I'm not sure this is the kind of show that benefits from such mainstream exposure from the NYT. What? Did a crazy person just wrest control of my keyboard and type that? A jealous blogger? No, no, and no. Perhaps I am nostalgic for 2008's edition in Long Island City, when organizers kept adding comedians to the lineup, and the room had a festive, warm, supportive atmosphere. This year's show was tighter, to be sure, but also probably not the best experience for the kind of unsuspecting Times reader who doesn't normally go to a stand-up comedy show. After all, you're witnessing mostly unknown or unheralded comedians attempting brand-new jokes. That's it. That's the show. For the comedy community, it's a great chance, and perfect timing after the holidays, to reconnect and reboot for a new year. For an audience, well, I'm not sold on what they're doing there. At least on this particular show. Am I wrong on this one?

More than a woman: The Late Late Show monologues of Whitney Cummings

Jon Benjamin Has A Van: So funny, it may be too funny for Comedy Central?